“Young people will have a fantastic future in this country,” says entrepreneur Saleh Nasreddin. The accomplished businessman exudes optimism as he talks of Ethiopia’s imminent economic take-off. 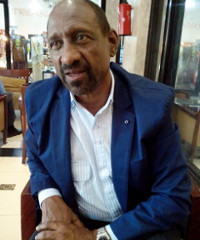 With a population of over 90 million, more young people accessing education, an emerging middle class and a government pushing a manufacturing and export-hub agenda, Nasreddin says Ethiopia’s prospects as an investment destination has never been better.

He started the business after noticing a gap in the market, and his company has since grown exponentially.

“Many farmers are now earning good money and are sending their kids to high schools and universities. It’s an obvious phenomenon. These people are just emerging from poverty and their lives are changing. If you go to the supermarkets you will see many foreign goods. Various brands of better biscuits and chocolate. This market is developing in every sector,” he says.

Nasreddin and his siblings grew up in Nigeria where their parents started a jute bag factory in the 1960s that is now one of the largest fast-moving consumer goods companies in West Africa. The NASCO Group is involved in nine industries from manufacturing food and personal care products to real estate. For several years Nasreddin worked at the Nigerian-headquartered conglomerate before shifting his focus to expanding the family’s interests abroad.

In the 1980s he took over a group of companies in Turkey that was undergoing financial difficulty. In a few years the business began to thrive but everything came crumbling down in the aftermath of the 9/11 attacks in New York when a family member was falsely linked with terrorism activities.

Nasreddin recounts arriving at an airport in Turkey for a business trip, unaware of the allegations, only to be told he was banned from entering.

Although the allegations were dropped seven years later and an apology issued, the damage had been done. The accounts of many of the businesses associated with the family had been frozen and operations in Turkey and Morocco halted leading to losses worth “hundreds of millions of dollars”. It is only in Nigeria that authorities, without evidence backing the allegations, refused to freeze bank accounts of the group which at the time employed more than 6,000 people.

“When you talk of something before you really face it, you think it’s the end world,” he said. “But once you face it, then you must find an exit from those problems and you start to do something else. We had problems, so we had to create other things.”

During the experience, Nasreddin focused his attention on the Ethiopian biscuit business, which was a few years old by then. The business grew exponentially, and in 2012 specialist asset management firm Silk Invest acquired a significant minority stake in NAS Foods.

“In countries where you have an almost similar population size, like Turkey and Egypt, the market is virtually saturated. Even Kenya with a smaller population is way ahead in the biscuit business. But in Ethiopia we still have a lot of ground to cover,” he says.

And Nasreddin’s ambitions for NAS Foods extend beyond biscuits.

“Our family has experience in breakfast cereals from our business in Nigeria. We have technology on sponge cakes and on packaging systems. Ethiopians are pasta eaters and we see huge potential there as well. NAS Foods will become one of the biggest food companies in Africa,” he predicts.

Although businesses in Ethiopia still face many hurdles including bureaucracy, an inexperienced labour force and a closed financial system, he notes the country has made big strides. But more needs to be done.

“Ethiopia is about to take off. So we have to do more to ensure the take off is not aborted.”

He attributes success in business to both passion and tenacity.

“Africa has everything. What we don’t have is the experience and exposure to the world. But we shouldn’t be afraid of mistakes [because] that’s how the world learnt. Yes, we will make mistakes, but we will be better.”