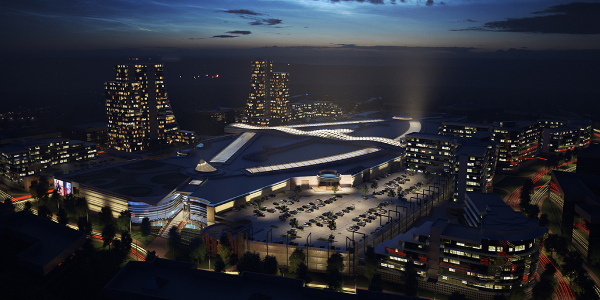 An architect’s rendering of the Mall of Africa at night

It’s Christmas in Johannesburg. There’s a storm every evening, Uber drivers are getting fewer and fewer trips as people flee for the summer holidays, and every day the Joburgers who haven’t invaded South Africa’s seaside towns flock – where else? – to one of the city’s many shopping centres. What is Christmas about, after all, if not spending the money you’ve spent all year in traffic for?

The latest addition to the city is Mall of Africa, the largest single phase (built in one go) shopping centre on the continent. Opened in April this year, the mall is celebrating its first Christmas, and it’s Vanessa Fourie’s job to make sure that it looks the part – Jingle Bells and all. Fourie is the brand manager for the mall.

“There’s a huge expectation from the customers. There really is. To them it’s almost as if it’s the be all and end all. For years we’ve been saying… we would just love not to [have to spend so much in decorations], because it’s quite a grudge purchase.”

Fourie explains that while the first year’s order of giant blue and gold baubles (those shiny hollow balls found on every Christmas tree), and tinsel is a capital expenditure, the next years’ costs, as they build on the decorations, will come from the marketing budget. And sprucing up the place doesn’t come cheap, running into the millions of rands. 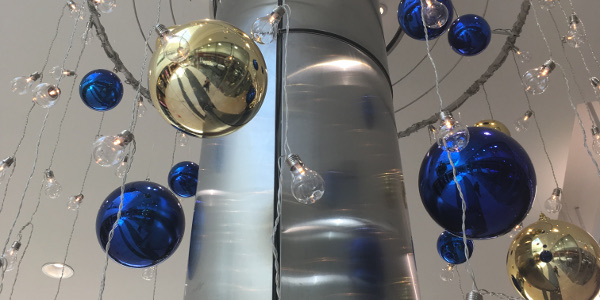 The decorations, most of which are shipped – this year despite rough seas, according to Fourie – from Europe and China (try not to imagine the Christmas tale where elves frantically try to keep the decorations safe as a boat is tossed by giant waves), also have to be put up by experts, and then packed carefully and stored in space that someone has to pay for.

“[Consumers] expect it to be Christmas – they want the Christmas music they want the décor… Psychologically I believe it does entice them to spend longer, to get that Christmassy feeling. But as a marketing person, I could have done so much with the money… So it’s quite a dynamic to actually balance.”

On a recent Wednesday, a shopper named Craig Knight and his daughter Autumn seemed to back the consumer expectations up. Asked how he would feel if there weren’t decorations, Knight replied, “I wouldn’t shop.”

“I know I wouldn’t shop,” added Autumn, who is eleven years old.

But it’s not hard to measure the results, it seems. Fourie tracks photographs, shares and likes online, and they seem to be going well, she says. Three weeks into December, the centre had more than a million customers, or ‘feet’ – the number they usually have over the course of a whole month. On black Friday alone, 85,000 customers went shopping at Mall of Africa.

Planning for Christmas decorations typically starts in April, when malls will speak to the handful of companies, according to Fourie, who are reliable enough to be able to carry out the task.

This year’s winning pitch, from The Magic Christmas Company, interpreted Africa as the centre of the universe, with countries and globes rotating around it. But this will be seen fully only in a few years’ time, as decorations are built up. 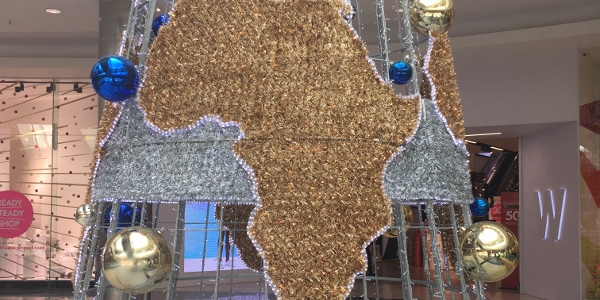 For now, Christmas looks like blue and gold baubles – they chose blue to avoid typical Christmas colours but add something that would “pop” in the brightly-lit mall, says Fourie – fairy lights in various configurations, silver tinsel, and a few gold tinsel Africas.

Fourie says that she didn’t want to go for traditional decorations, because, “We are Mall of Africa, we’re also in Africa, and it’s 35 degrees outside. You know for me personally it doesn’t make sense to put up snow men and reindeer – it has some kid appeal – but it’s not, in my mind, representative of a South African Christmas.”

(As an aside, if the decorations aren’t enough, people can turn to some of the permanent features for a sense of wonder. Among them are giant trees reminiscent of acacias – pillars reaching up from the ground through a few floors and turning into branches that hold the ceiling up). 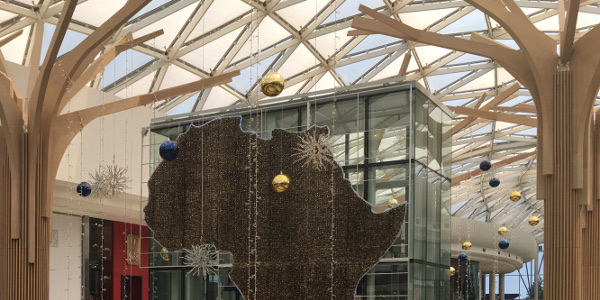 Mall of Africa has at least five target markets, says Fourie. The first is people who live or work nearby; the second are those who want to meet for a business lunch or similar half way between Johannesburg and Pretoria; the third is people who want to go to certain restaurants to be seen, and don’t mind driving far to get there (“an entertainment seeker willing to travel”); the fourth group on their way home from work – who could go to the mall because it’s a place where they can wait out the traffic; and the final one is “out-of-towners”, including shoppers from elsewhere in Africa who would make the trip there to buy clothing and other goods for a whole season or year – in other words, wealthy Africans from countries where the selection isn’t as good as South Africa’s. (Sandton City currently holds the reputation as mall of choice for this market).

But Fourie adds that it will take a year before the mall can fully make sense of patterns and behaviours and adapt accordingly.

The biggest challenge of the Christmas period, she says, is maintenance – like replacing toilet paper, making sure there is soap in the soap dispensers – and for restaurants to keep up with the increase in the number of people.

“The reality is, you’re not going to have what you have on a normal trading day.”

So what does Vanessa Fourie want for Christmas?

“A really good book, and a nice place to read it.”