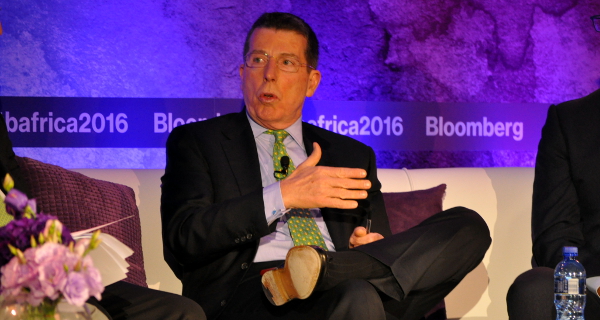 “Barclays is in a difficult position,” said the bank’s former CEO, Bob Diamond, during a panel discussion at the 2016 Bloomberg Africa Business and Economic Summit.

Barclays’ re-evaluation of its African strategy, and possible scaling back of its operations, has more to do with regulation in the UK than it has to do with its vision for Africa, according to Bob Diamond, former Barclays boss and co-founder of Atlas Mara.

“Barclays is in a difficult position. This has absolutely nothing to do with their vision of the future of Africa,” he said during a panel discussion at the Bloomberg Africa Business and Economic Summit in Cape Town today.

Barclays’ new CEO, Jes Staley, is said to be considering selling the firm’s 62% stake in Barclays Africa Group (reportedly valued at over US$4bn) which houses much of its African business. Staley is expected to release more details around his plans for the continent alongside the presentation of the bank’s full-year earnings next week Tuesday.

“The UK taxes Barclays and the other UK-based banks on their global balance sheets, so they are taxing depositors in South Africa and Botswana, and the regulators in the UK are charging Barclays for a 100% capital when they own 62%,” stated Diamond.

“So this [talk of selling its African operations] has more to do with regulation, particularly regulation driven in the UK, than it has anything to do with the vision of Africa.”

Africa has not been the only region where Barclays has looked at scaling back operations. Towards the end of last year it announced the sale of assets in Europe, including Portugal, Italy and Spain.

Diamond is the co-founder of Atlas Mara, an Africa-focused financial services investment group that he launched in November 2013 with Dubai-based businessman, Ashish Thakkar. The company has since acquired eight banks in seven sub-Saharan African markets.

Despite global headwinds that have resulted in weakening African currencies and slowing growth in markets such as South Africa, Diamond said his risk appetite to invest in African banks is even greater than before.

“We still believe in the [African] story, and the entry points in terms of prices are lower. The competition for acquisitions is lower. The currencies are cheaper compared to international currencies. So frankly we see this as an improving environment.”

However, not everyone shares his optimism and last month rating agency Fitch gave a negative outlook for the banking sector in sub-Saharan Africa for 2016, citing “sovereign worries”.

“As a result of strong and multiple challenges, we believe sub-Saharan Africa banks are likely to face slower growth, weaker earnings, worsening asset quality and tighter liquidity and capitalisation,” stated the agency’s release.