When a group of ambitious professional women set up the Kenya Women Finance Trust (KWFT) in 1981, they had no idea that it would one day grow into a financial services giant. 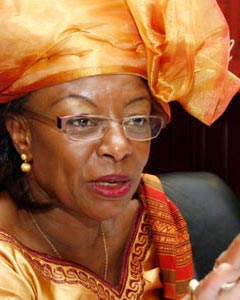 The group’s humble goal at the time was to help women access loans by organising them into groups where members would contribute between Ksh.200 (US$2.5) and Ksh.1000 ($12.3) each.

Today the trust has exceeded the dreams of its founders. KWFT has since changed its name to Kenya Women Holdings (KWH) and provides financial services to more than 400,000 women, boasting a loan portfolio of over Ksh.13 billion ($160 million).

Elizabeth Naliaka is one of the Kenyan women who has benefitted through KWH’s microfinance facilities. Initially a tailor in a rural village in Kitale, Naliaka struggled to put her children through school due to the low income she made. She then joined the KWFT branch in Kitale.

“I was put through vigorous training for close to a year [and] gained a lot of knowledge and encouragement from other women. Later I was given a loan of Ksh.30,000 ($368). It was then that I ventured into poultry farming,” she says.

Naliaka repaid her loan and was granted another of Ksh.100,000 ($1,200). This time she bought dairy cattle and expanded her poultry farming.

She hopes to borrow another Ksh.500,000 ($6,100) to purchase a tractor to ease and expand her agricultural ventures.

This is just one of the many success stories associated with the microfinance that has empowered rural women in Kenya to get into business.

For over a decade, Dr Jennifer Riria has played a critical part in the trust, first as CEO of KWFT and currently as CEO of KWH.

During an interview at her office, Riria recounted the challenges Kenyan women faced in the early 1990s in accessing financial services and how the trust has managed to support them.

“In the early 1990s women were [ignored] by the banks [and] they had to struggle to position themselves in business. Our goal was to empower women by financing their business ideas to make them financially independent and contribute to family wealth,” she says.

This was no easy task. She was labeled a home-breaker and warned by men to stay away from their wives for allegedly making them ‘big headed’.

When she joined KWFT in 1991, Riria embarked on a strategy to give the organisation a national outlook and spread its services countrywide.

“We had to scale-up operations by establishing more outlets countrywide and decentralise our services. We wanted the women in Tana River, Lodwar, Garissa, and all other remote parts of the country to have access to financial support which was not forthcoming from banks at the time,” she explains.

Nothing brings her more joy than to see women access financial services as well as improve their lives and that of their families.

“Seeing banks, insurance companies and the government roll out special financial services for women is only an assertion of the great work conducted by KWH over the years. It is proof that we have succeeded in a shifting the mindset, to make people understand that women have an economic force,” she says.

The transformation to a deposit taking microfinance institution, Riria says, will enable KWFT DTM to diversify and increase its product range to offer savings products to its clients in addition to loans.

“We will have opened 20 bank [branches] by the end of the year which will allow women to save and access loan facilities. Already our [branch] in Kakamega (complete with a mother room for breast feeding mothers) has been launched. We should soon be opening branches in Mombasa, Nairobi and Nyeri,” she says.

“KWFT DTM does not require any of the conventional securities like title deeds. We are aware that women do not have them. We provide character loans, where clients guarantee each other.”

“My next challenge is to unite women across the country to have one voice and embrace sisterhood. At KWH, we shall empower women not just financially but in other aspects of their lives such as education and human rights,” she explains.

“We know that women need more than money hence our continued efforts to offer credit plus products. We do these by offering insurance products to cover medical services for our clientele and their families, providing water harvesting solutions and electricity loans to improve their lifestyles,” says Riria.

“The African woman holds the sky in her hands. What lacked in the past was the system accepting the economic power of women [but] we have managed to change mindsets. I believe women play a huge role in developing the economy, that is why we bank on them,” she says.

Given the thrust of its business, one may be mistaken to think KWH is a feminist organisation where men do not feature as beneficiaries, contractors, or as staff members. Not so. Riria says KWH is an equal opportunity employer of whom 50% of staff are men and 50% are women.

“Through empowering women we support the entire family. In fact we are currently working with other organisations to ensure equal opportunities for all genders. Combined efforts by men and women will have a better impact on the economy and society,” she says.