Egypt has had a tough few years, but the results of Oxford Business Group’s inaugural Business Barometer: Egypt CEO Survey suggest the worst is finally over.

Since 2011 the country has seen its GDP growth slow, the value of its currency drop and its foreign reserves shrink. Inflation has spiked, debt is creeping upward and the deficit has widened. The country’s tourism sector, a key foreign exchange earner, suffers from security concerns, while a shortage of natural gas has curtailed industrial output.

These challenges have not proven easy to solve, and are made all the more urgent by Egypt’s youthful 92 million citizens, who are searching for jobs and hoping for a better life.

However, while there is still a lot of work to do, recovery is – at last – gaining crucial momentum.

For example, this year GDP growth should see a slight increase of 20 basis points. A much-needed process of fiscal reform is also under way, resulting in a new value-added tax, a reduction in fuel subsidies and a slate of proposed privatisations – all of which have the capacity to bring the deficit down to single digits.

A number of other policy decisions are helping to stabilise the economy. The floating of the pound has driven up inflation but improved the competitiveness of exports. The government has also been working on a new investment framework, which will reduce licensing time, improve dispute settlement and simplify the land acquisition process.

And there are other factors playing in favour of the Arab world’s most-populous nation: a recent Mediterranean gas field is expected to double the size of the country’s gas reserves, while the roll out of 4G networks last year will spur digitalisation.

Things are looking up.

But you don’t have to take my word for it.

Oxford Business Group’s first-ever Business Barometer: Egypt CEO Survey, which measured business confidence and sentiment over the past two quarters, reveals a striking bullishness on the part of the country’s chief executives and chairpersons.

Nearly four-fifths of the survey respondents, for example, were positive or very positive about local business conditions for the coming year. That this comes in spite of high unemployment and inflation, and a weak sovereign rating, is a reflection of Egypt’s political stability and a testament to the government’s macroeconomic and monetary reforms.

This optimism has the potential to make a real impact on growth, particularly since the businesses surveyed collectively employ roughly 72,000 people. Three-quarters of survey respondents said they are either likely or very likely to make a significant investment over the next year, for example.

Of course, this is not to imply Egypt’s recovery is assured. In addition to the weak public balance sheet, sagging currency and slow growth, the country continues to face other, more mundane challenges. As in many frontier and emerging markets, access to credit remains a significant problem, with 57% respondents characterising commercial borrowing as either difficult or very difficult. Fewer than 5% see it is very easy.

Clearly, there is still plenty of work to do in Egypt, but the results of this survey suggest the country’s business leaders believe the economy has turned the corner; a long-overdue recovery has begun. 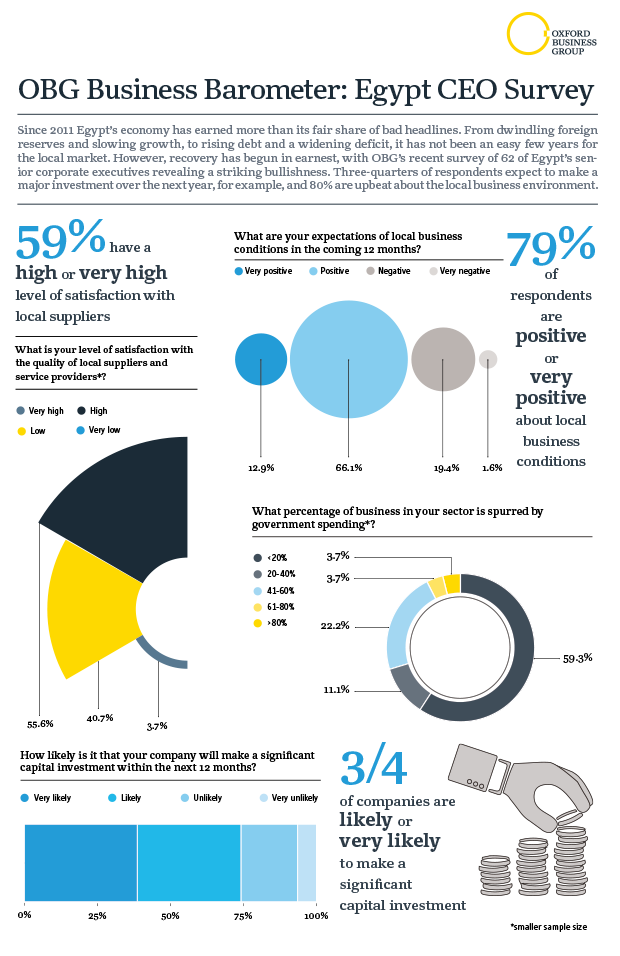