Africa is urbanising fast. Today, to deal with its exponential urban growth, building new cities appears to be the new trend. 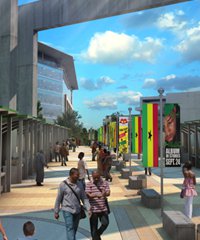 At the end of May 2012, mayors and leaders from Africa’s top cities even gathered in Lagos to debate the region’s urban transformation. The meeting featured those managing, planning, designing and financing Africa’s most innovative cities. Speakers were world-class authorities in urban planning, infrastructure, housing, construction, transport, energy and architecture.

But, no need to call them all to the rescue to find the obvious result: The developers are building independent urban projects on the outskirts of existing mega cities. From Eko Atlantic on Victoria Island in Lagos to Tatu City outside Nairobi, new cities are budding these years at a steady pace, starting from afresh and trying to replicate the “Sandton model” set in Johannesburg 25 years ago.

Ghana has entered this new development rush with its most recent urban projects: King City and Kpone-Appolonia. Their promoters call them nothing less than “Africa’s cities of the future”. And one must agree that the projected cities of Appolonia and King City in Ghana, as well as Tatu in Kenya, are establishing a new milestone in urban planning in Africa. Renaissance Group, the Moscow-based investors who originated both projects, has bought 1,000 ha of land a few miles from Takoradi, and more than 800 ha between the towns of Oyibi and Appolonia, in the greater Accra metropolitan region.

DLC, the professional team that worked on these projects comprised specialists in a number of fields, including land surveyors, engineers, environmentalists and community and cultural specialists. A considerable amount of time was spent during the analysis stage to gather information on all the different aspects related to the planning areas and their surrounding environments, and all of the information was used to inform the design of the two developments. They had to make sure that geography, ecology and culture were all taken in account to produce sustainable and mixed-use towns.

Frikkie de Lange, CEO of DLC, says the objective was “to emphasise a holistic lifestyle in world class modern amenities: the creation of sustainable neighbourhoods that are attractive, safe, and convenient places for people to live, work, play and socialise in”.

But why build satellite cities rather than integrating the new developments into the existing urban nodes? Jaksa Barbir, consultant in spatial planning and urban design explains. “In the case of African cities where rapid population growth has overtaken good planning, land use management and the provision of engineering services, satellite cities are often one way to relieve the congestion in the core city by developing multi-nodal cities where all movement and development is not focused around a single urban node,” he says.

“In this way, traffic movement patterns are redirected, new engineering services can be installed and good quality development can take place in planned environments. However, the prerequisite is that these satellite cities must be integrated environments, not only providing residential opportunities but also employment, business, social, educational and recreational opportunities. Merely developing housing in so-called satellite locations will only worsen the situation as more and more people are forced to drive further distances to the main (or only) central economic core. These developments are in line with the Ghana National Urban Policy’s approach towards stimulating decentralised development in the major urban areas in order to relieve congestion in established central areas.”

Countless foreign investors came to Ghana in the previous centuries in a rush for gold and other raw materials. Today, Ghana’s economic health, rapid urbanisation and growth of middle classes are creating yet another attractive arena for land and property development. Lack of supply and the scale of demand are keys to the success of these projects. It takes determination, courage and even some sense of adventure to build modern cities from scratch. But Arnold Meyer, head of Africa real estate at Renaissance Group, has gained a reputation for “doing daring things in strange places”.

When completed in a little over a decade, these projects will be multi-billion-dollar cities, with shops and houses, offices and parks. They will host more than 180,000 residents in around 50,000 housing units. Kpone-Appolonia, adjacent to Accra, with its 88,000 residents and visitors, will provide 1.6 million m2 of retail, commercial and industrial space with tourism, social and recreation facilities.

These new settlements are centred on the concept of work-live-play: providing a comprehensive mix of land uses to cater for all the needs of its residents and visitors (including residential developments, retail, commercial, tourism, social facilities and recreation) and promoting public transport, as well as non-motorised forms of intra-urban movement.

Riana du Plessis, Johannesburg-based urban planner and member of the DLC town planning team, fosters the concept that underpinned the whole planning and design. “We also wanted to facilitate social interaction and create a sense of community”, she laughs, assured that this approach sets new standards in African urban planning.

“The approach itself is not new,” Du Plessis says, “as it is based on acknowledged international best practice regarding the development of new settlements. However, the implementation of these principles in African cities have been lacking to a great degree. These new developments therefore illustrate the benefits of employing good planning and development principles, and also that it is possible to have sustainable, good urban development in Africa.”

However, urban planning is not necessarily the greatest challenge. The degree of successful urban management and development control often becomes more important (and challenging) than the planning itself.

The team of planners is aware of the threats their projects will have to face in the next decade.

“Other than the obvious global economic uncertainties that could have a financial implication for these developments”, says Frikkie de Lange, “the main potential threats are lack of infrastructure development (especially bulk services such as water, sewerage, electricity and trunk roads) and the management of new development around these cities. While the client has a clear development vision and has built in a number of management and quality controls that will ensure the on-going sustainability and efficiency of the developments, the same may not happen in new future developments around the proposed development. It is therefore vital that local authorities ensure that the qualities of other, surrounding developments ascribe to similar planning and development standards.”

Critics also suggest the risk that, in the mid-term, these well planned cities turn into “ghettos for the rich”. But De Lange assures that, this time, special care has been given to the accommodation and integration of different income groups. “The layout and development guidelines for both settlements acknowledge and aim to accommodate informal and emerging economic activities,” he says. “This is an allowance for a variety of lifestyles (such as urban living in busy, high-rise and mixed-use environments; living in quiet residential neighbourhoods; suburban living in single-family houses; living in gated communities, etc.).”

In the increasingly globalised world where people from different countries and continents live and work similarly, consume the same goods, use the same or similar technologies, build in a similar way with similar building materials, watch the same TV programmes, aspire to the same or similar lifestyles, etc. it is difficult to define the unique features of the African city of the future. But one thing is certain: it is being created today.

Faustin Moukala is an architect and managing director at Siwara Associates, a consultancy firm managing development projects in sub-Saharan Africa.