About a month ago Raphaelle Nemo landed in Lomé, Togo. She had travelled from South Africa and was on her way to meet two 22-year-old entrepreneurs: Sam Kodo who started technology company Infinite Loop, and Koffi Akagla, founder of Super Energy, a maker of customised extension cords. 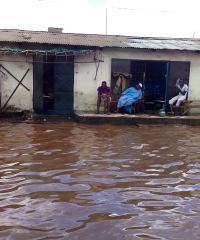 During a visit to Côte d’Ivoire, The Anzisha Prize team had to contend with severe flooding.

Both are semifinalists for the 2014 Anzisha Prize, a competition that recognises young African entrepreneurs who are using business to solve problems in their communities. More than 300 young entrepreneurs applied for this year’s prize.

Nemo is part of the Anzisha Prize site visit team that go out to inspect and vet the businesses of each of the applicants.

From Togo, Nemo travelled to Côte d’Ivoire and arrived to collapsed buildings and submerged roads. The West African country had just experienced days of intense rain and according to local news reports 39 people were killed due to the flooding that ensued.

Why does the Anzisha Prize go to these lengths to visit the semifinalists?

The site visit stage is meant to ensure the legitimacy of the applicants’ projects. Many organisations undergo similar vetting processes, but none have made such a bold commitment. The Anzisha Prize goes beyond only checking whether these projects are real or not.

This year the Anzisha Prize also enlisted the help of past finalists of the competition to visit the 2014 hopefuls. For example, Barclay Paul, the young CEO of Impact Africa Industries in Kenya and a 2013 Anzisha finalist, paid a visit to Tom Osborn, the 18-year-old founder of Greenchar. The business has developed charcoal briquettes that are energy efficient and also smokeless, making them safer for humans.

“Tom has a product that the community needs and we saw proof of this from the people we met there,” said Paul, adding that the site visit showed him that Osborn’s project was bigger than he had originally thought.

As the Anzisha Prize grows bigger each year, maintaining integrity by verifying the projects of semifinalists is one of the goals of the site visits. But it is also part of a larger mission of Anzisha, which is to champion young African people who are doing amazing things as entrepreneurs. And conducting site visits to wherever semifinalists are located in Africa, is an example of that commitment.