For many years, oil has been the leading export earner for Nigeria, but the sector has not been effective in creating employment opportunities for the West African nation’s ballooning youth population. Nigeria is now increasingly focusing on other sectors, such as agriculture, as it seeks to diversify its revenue stream and reduce dependence on the Niger Delta’s black gold. 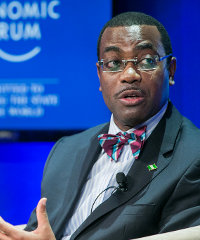 Akinwunmi Adesina, minister of agriculture and rural development of Nigeria

According to Nigeria’s minister for agriculture and rural development, Akinwumi Adesina, shifting focus towards farming is justified.

“Agriculture is going to be the lifeline for Africa… take a look at Nigeria, for example, we have 84 million hectares of land of which no more than 60% of it is cultivated. In fact, in terms of optimal cultivation, no more than10% of it is in high quality seed, fertilisers, mechanisation and good irrigation,” said Adesina.

Speaking at the World Economic Forum on Africa, recently held in Cape Town, Adesina said Nigeria is positioning itself to become a key player in global food production.

“In Nigeria we have focused on making our agriculture more productive, efficient and competitive. We want to be a global player. With the kind of water we have [and] cheap labour we have to intensify agriculture, it makes absolutely no sense to me that we are a large importer of food. We want to industrialise agriculture and make it to be a major revenue earner for us,” he explained.

To maximise the opportunities in agriculture, Adesina noted that Nigeria and the rest of Africa have to make a paradigm shift and treat agriculture as a business as opposed to a development activity. Governments should also provide support to the private sector.

The minister recounted how for four decades, the government fed corruption by involving itself in the buying and selling of agricultural inputs and equipment.

Adesina explained that upon his appointment, he inherited a fertiliser supply scheme that was probably “the most corrupt system that you would find in Nigeria”, where farmers were sold bags of “half sand and half fertliser”.

The government’s involvement in fertliser supply was crowding out the private sector and essentially truncated the supply chains of private seed and fertiliser companies.

The Nigerian government has since privatised the system, removing itself from the buying and selling of seeds and fertilisers.

Nigeria also developed an electronic wallet system to disburse agricultural subsidies to farmers in a programme that has saved the government losses worth millions.

“Today we have registered 10 million farmers… we send electronic coupons for seed and fertiliser to them by mobile phones. In our first year we reached 1.5 million of them and that impacted 7.5 million people. This year we are going to reach 10 million of them by phone,” Adesina explained.

Nigeria has also established risk sharing mechanisms to reduce the risks banks face when lending to farmers. This, he said, can be replicated across Africa to encourage lending from banks, which often complain about agricultural related risks such as unpredictable weather patterns, crop and animal diseases and limited access to markets.

“Today in Africa, the thing we need to do is to put in place risk sharing instruments that allows the risk that the banks face when they lend to agriculture to be much reduced,” said Adesina.

“In Nigeria we put in place with the Central Bank of Nigeria a facility of $350 million that is leveraging $3.5 billion off the balance sheet of our banks,” he continued.

The ongoing transformation of Nigeria’s agricultural sector is paying off with many investors now eyeing the market. In the last one year, Adesina said that Nigeria attracted $8 billion worth of investment commitments from the private sector.