South Africa, Nigeria and Kenya are Africa’s best investment destinations for 2011, according to the Dutch-based organisation Africa Business Panel. 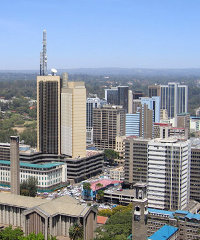 Nairobi's central business district. Kenya has been identified as one of the continent's top three investment destinations.

The three countries came out tops in a survey among 800 professionals currently involved in the continent. The top ten countries are, in order of preference: South Africa, Nigeria, Kenya, Ghana, Angola, Tanzania, Rwanda, Botswana, Uganda and Mozambique.

Africa Business Panel said in a statement that all the top ten countries are in Sub-Saharan Africa due to the political turmoil in North Africa, which led to a drop in investor confidence in the region.

All of the top ten countries, with the exception of Rwanda, are also non-francophone nations.

The statement continued by saying that almost all African markets are seeing encouraging year-on-year growth. “This is attracting the attention of the international investor community who increasingly see Africa as the last frontier for attractive growth opportunities.”

Lourens van Niekerk, a senior manager at Standard Bank, commented that he sees significant potential in the Angolan market. “Angola is still growing its economy at a massive speed and with the oil price appreciation it is bound to continue. A distinct lack of certain products and services is growing rather than declining and makes Angola a frontier market of the first order.”

Van Niekerk added that South Africa could be used as a springboard for investment into the rest of the continent. He also said that Accra, Ghana is a good base for doing business in the greater West Africa region.

Ibok is also enthusiastic about the progress that Rwanda has made in recent years.