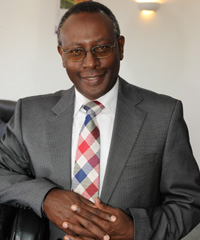 How we made it in Africa’s Dinfin Mulupi caught up with KenGen’s managing director Eddy Njoroge – who is set to retire in June – to talk about Africa’s energy challenges, China’s growing presence in the industry and lessons from his long career.

Last year construction began at your 280MW Olkaria IV geothermal power project ,which has attracted a lot of international attention. What is the progress of the project?

The project is ongoing and we are sure that it will be online by the end of next year. The entire 280MW should be commissioned by the end of 2014. That is a record when you consider 280MW being built within five years. The project has been driven by demand. Geothermal is one of the cheapest options that Kenya has. We have sufficient geothermal resources in this country and all we need to do is exploit it. The 280MW is not a huge input into the grid considering the demand growth in this country, which is over 8% growth per annum cumulative. We need to be building more than 280MW every year. However, we are excited that this is the first big project, costing about US$1 billion. It is a unique project made possible by the collaboration of many partners. The icing on the cake is the fact that we will also deliver power at the price of about $0.7, one of the cheapest in the world.

Upon completion of Olkaria IV in 2014, KenGen will supply just over 1,500MW. With the growing demand for power in Kenya, how do you intend to fill the demand supply gap?

We are looking at geothermal energy. We have gone out to tender for expression of interest for joint venture partners or steam conversion partners. We could have another 650MW of geothermal energy between now and 2018. We are also looking at coal which could give us about 1,200MW. We have done feasibility studies on wind and we reckon that some places in Marsabit and Isiolo (northern Kenya) could generate 150MW of wind. Therefore it is possible to have an additional 1,500MW by 2018. By 2030 however the demand should be at 15,000MW. If we don’t think long-term, we could play catch up. Part of the problem we have had before is concentrating on one project at a time. We need to have a pipeline of projects in different stages to meet the growing demand.

Describe the challenges you face.

Financing is our main challenge. We have been traditional in terms of financing options. We have always looked to the DFIs; the World Bank and Japan International Cooperation Agency (JICA). We want to change that thinking and look at a wider scope of financing options. When you think about 15,000MW expansion you are talking of $40 billion between now and 2030. That financing will be a challenge.

In all these energy projects in Kenya and the rest of Africa, China’s participation either in financing or implementation is increasing. Your thoughts on this?

In our sphere China is not that active but they are obviously coming in. They have built one of our small hydro plants and are looking at wind energy. They are willing to venture out. They are not too concerned about the risks. Western countries have always looked at Africa as a place too risky to invest in. Sometimes when you look at the risks, they are so mitigated. There are hardly any risks.