It is Saturday afternoon and I find myself in the heart of Lomé, the capital of Togo, at Akodessewa Fetish Market. It is considered the largest fetish market in the world and, for some, it is the Walmart of voodoo in the region. The market has an assortment of animal parts, bone statues and herbs. But I am not in West Africa to pick up a new hobby. My trip has brought me to Togo and West Africa to get a better understanding of both the traditional medicine and pharmaceutical industries. 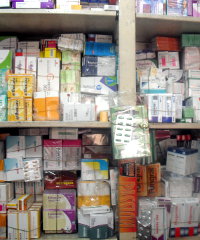 In sub-Saharan Africa, pharmaceutical products are distributed through a number of different channels.

A large percentage of sub-Saharan Africans make use of traditional medicines. But African markets hold enormous potential for pharmaceutical companies. According to IMS Health, pharmaceutical spending in Africa is expected to grow by 11% a year to reach US$30 billion in 2016. Africa remains the only continent where non-communicable diseases – such as cancer, diabetes, cardiovascular and respiratory diseases – aren’t the biggest cause of death. While infectious diseases such as malaria will remain a burden for most countries, the World Health Organisation predicts that by 2020 a large increase in non-communicable diseases will occur in Africa.

For most pharmaceutical companies, the challenge remains a targeted business strategy focused on specific countries or regions. Africa is by no means homogeneous, but represents diverse countries, markets, communities, and development stages. For example, Chad has only 60 km of paved roads per million people, whereas countries like Algeria and Namibia have over 2000 km per million people.

But regional similarities and colonial impacts are also visible and important to understand (e.g. French colonisation versus English colonisation). For example, the pharmaceutical supply chain of Franco West Africa (e.g. Mali) is far less fragmented that Anglo West Africa (e.g. Ghana). Regions can also play an important part when reviewing market attractiveness. Regional trade agreements such as the East African Community (EAC) or the Economic Community of West African States (ECOWAS) have the potential to reduce or remove trade barriers and tariffs. However, most trading agreements are still some distance away from the European style Medicine Agency that streamlines medicine registration processes.

For pharmaceutical companies with limited information on the ground, identifying key market segments and forecasting demand is taxing. To succeed in African markets, pharmaceutical companies need to consider pricing and product. There are significant lessons to be learnt from traditional medicine and the consumer goods industry. Often the focus is on smaller package sizes (e.g. sachets) and breaking bulk to make units more affordable.

Companies also need to study local customs and how drugs are administered. In some cases pharmaceuticals are complimentary to traditional medicine. Companies should also rethink package design and images on packages. For example in Lagos’ Idumota market, I was told the best selling anti-inflammatory drug has the most visible image on the pack. “People want to see what the drug can do,” noted a pharmacist assistant.

For many organisations – including government health departments – counterfeit is a major concern, as drugs often enter through poorly controlled borders with limited visibility and quantification. A good example is the Nigerian border with Benin where “porters” are hired to take pharmaceutical drugs across the border. Anti-counterfeit initiatives such as scratch codes and text message services (like in Nigeria) are important measures to safeguard against counterfeit.

Companies also need to understand parallel import practices. Parallel imports are non-counterfeit products imported in the country without the permission of the intellectual property owner. For example, in Lagos our team recorded three different country sources for a well known branded pain reliever. It is important to note that counterfeit and sub-standard products are not just limited to pharmaceuticals. Traditional medicine faces huge challenges too. Anybody who has recently been to a muti (traditional medicine) shop in South Africa would have been confronted with not just local products and ingredients, but a range of products (mostly branded) from China and India. Some with questionable benefits and sub-standard ingredients.

Pharmaceutical companies need to understand the existing product flow of pharmaceuticals in the market, from manufacturing to dispensing. African markets tend to be highly fragmented, with few pharmacy chains with high volume. In some countries, there are high barriers to entry for establishing a pharmacy. For example in Mali, there is a waiting list of pharmacists hoping to be granted a licence to practice. In Nigeria, open markets, such as Idumota, also play a critical role in distribution. In some countries, like Ghana, individual drug salesmen supply upcountry markets through van sales. While most pharmaceutical companies might shudder to tap into such informal networks, it is important to understand how these markets work and which segments of the outlet base they reach.

For most pharmaceutical companies finding the right local partner can be a challenging undertaking. Often available warehouses are poorly designed, with limited yard management, ventilation and equipment. When assessing cold chain requirements, companies need to review contingency plans and consider backup generators. For pharmaceutical companies looking to enter a market, there are often limited numbers of distribution partners that will meet their standards. In many cases, the best distribution partners might already be working with competitor companies, which pose a conflict of interest.

For accessing both the private and public sectors, companies may need to consider different partners. In some African countries, NGOs also play a key role in hard to reach areas and might be responsible for the last mile logistics, like in South Sudan. NGOs also have contact with healthcare professionals and international donors, and may have good relationships with key government officials. Local partners’ insight is also critical when navigating the local regulatory environment.

With an increased middle class and alarming growth in non-communicable diseases, African markets hold enormous potential for pharmaceutical companies. But even with rising income levels, traditional medicine will continue to grow and play an important part, as seen in Asia. Understanding this, with the right due diligence and partnerships, pharmaceutical companies have a real opportunity as long as they take time to understand markets, build long term relationships and invest in local operations. And that is no voodoo business.