The Director of Economic Studies of the Inter-African Coffee Organisation (IACO), Kwaku Owusu-Baah, was one of the prominent participants at the just-concluded fifth African Economic Conference (AEC) in Tunis. During the conference, Owusu-Baah, an agricultural economist, raised several issues which he said have seriously compromised Africa’s comparative advantage in the production and trade in agricultural commodities since the mid-1980s. In an interview, he decried the neglect of agriculture by both African governments and development institutions. 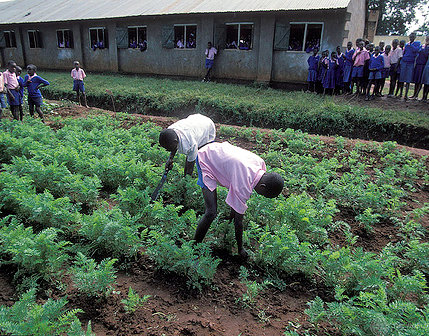 Kwaku Owusu-Baah says it is important to involve Africa's youth in agriculture projects.

What are some of the mistakes African countries have made with regard to agriculture?

The first source of mistake is traditional presumption that national governments and development organisations can pursue economic growth for its own sake thus creating some optimism in the system but missing out on logical imperatives of real development and social progress. We have seen in many instances that optimism alone is not enough. The question now is what is the priority for Africa; pursuance of growth or human welfare? It is interesting to note that despite the financial crisis, it has been estimated that Africa will record a turn-around growth rate of 5.5% in 2010 and perhaps reaching some 6% in 2011.

The discussions during the [conference] clearly revealed that it is possible today for national governments to pursue policies of good governance, infrastructure and private sector development, internal resource mobilisation etc, and still fail to create an appropriate agricultural business environment that could help give the continent’s economies grassroots lease of life or resilience. It is needless to say that the economic growth we are witnessing today are attributable to long-term impact of the Economic Recovery Programmes (ERPs) adopted by most African countries in the 1980s and 1990s. In pursuance of those ERPs, African countries as a matter of policy also pursued liberalisation programmes under which they reduced their support to agriculture. This was predicated on the erroneous assumption that market forces would pick up the incentives so created. The expectation that market forces would lead us to agricultural efficiency should not have arisen and this to me is the second African mistake, as the private sector which was to fill the gap left by government was not ready.

What explains this private sector failure to fill in the gap in agriculture?

Many a time, we forget that poor people in agriculture including the individual household farmers who have been responsible for the bulk of the African agricultural outputs also form part of private sector practitioners. Despite their efforts, poverty is prevalent among these people. The ‘private sector’ that has the necessary resources for real investment was not involved in agriculture.

Agricultural relegation under government liberalisation policies consequently resulted in decline in investments in agricultural research, human development, women empowerment, extension services, technological innovation, trade etc. The private sector should not be expected to come from another planet when the government was doing nothing to invest in our people’s brain, and agricultural services. Agricultural cooperatives were even neglected. SMEs and women empowerment to credits access to land were left out of government policies. I believe this was what went wrong.

What are the solutions to some of these problems?

Simply go back to agriculture. It is not entirely a private sector affair. At least the government should participate to develop a motivating environment in the sector. At times no incentives are put in place for value additions. Experience with the coffee processing firms in Côte d’Ivoire has shown that the same rates of taxation per kilo are charged for raw coffee beans and processed coffee. The expectation is that governments should undertake more business development services to support farmers and help them set up and manage cooperatives and small scale processing plants. Thus, it is too early for African governments and development partners for that matter to think that agriculture may not be important.

The African Development Bank (AfDB) should assist to find ways to capacitate African countries on how to manage their resources. The AfDB must also increase its current level of commitment to agriculture, while encouraging African countries to commit at least 10% of their budgetary allocations to agriculture as required under the Maputo Declaration. AfDB should continue to help African countries to set their growth priorities right. This growth we are talking about is all well and good but poverty may compromise growth. If we want growth to be inclusive it has to address the issue of poverty.

Yesterday you made a very strong point during the session concerning the African youth and agriculture, what is it all about?

In fact, one of the challenges we have in Africa now is that the agricultural population is ageing and there are no programmes to entice the youth into agriculture. In the coming years, we may be calling conferences to address this problem. If the youth in Africa have some sustained assistance programmes, many of them would rather prefer to live in their rural environments than hustle in other urban areas for inexistent jobs. This is the time to begin to find solutions to the problem. In this regard, I have developed a “coffee seedling programme” which proposes to pay some 20-50 US dollars to young school leavers who can develop about 1000 coffee seedling. If they develop the seedlings and would want to go into coffee plantations themselves, they will have the seedlings free of charges. The objective of this programme is to provide a regular source of income to the young prospective farmers and to lure the youth back into farming. It sounds easy but for sure its implementation will be difficult. It stands to reason that one has to take the risk to start somewhere. In this initiative, I have selected 10 villages in the coffee producing areas of Ghana for the pilot phase of the programme. The estimated cost of the programme is 6 million US dollars and I am sourcing for partners and resources.

In conclusion, is there any hope for Africa?

If you base your evaluation on what you hear everyday because we are always talking, you will conclude that we have [a] very bright future. Find out how many conferences we have had in Africa since the first AEC and how many of the recommendations have been implemented so far. For this AEC, I told my Director that I should be excused because I felt there was nothing new to come and say but he suggested I should still come and in his words, “re-emphasise what had been said”. Africa has no viable excuses for continued failure given the immensity of our natural resources and expertise. Having said that, I am tempted to say that there is still hope. From this conference one is struck by the growing number of intellectuals in Africa. But there is an irritating gap between intellectual reasoning which is futuristic and political reasoning which is ad-hoc, based on quick-fixes for here and now to satisfy uninformed electorate demands.

This article was first published by the African Development Bank