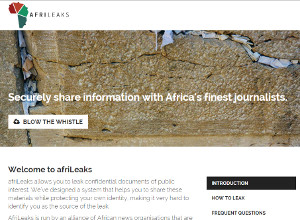 The western world has WikiLeaks, now Africa has AfriLeaks.

Employing tech to root out corruption

The western world has WikiLeaks, now Africa has AfriLeaks. Run by an alliance of African news organisations, the site allows individuals to anonymously send documents to any member organisation for investigation. Aimed at both politicians and businessmen, the site is an attempt to employ technology to tackle the corruption widely considered to be prevalent across certain sectors in some African nations.

The site’s founders believe AfriLeaks will tackle growing surveillance of individuals by governments and corporates. It is unclear what the uptake will be – many sites of this kind do not see the kind of usage you would perhaps expect – but nonetheless it is a valiant attempt to tackle corruption on the continent and improve the practice of investigative journalism. It also follows in the wake of similar initiatives, notably in East Africa. In Uganda, Not In My Country allows students to rate the performance of their lecturers and report them for corruption, while Kenya’s I Paid A Bribe  encourages citizens to highlight instances of corruption in the country.

Kenya is – quite rightly – held up as a beacon for the rest of Africa in terms of technological development, but controversies continue to hinder it reaching its full potential. The government’s flagship laptops-for-schools project remains stuck in limbo. In the areas of Wi-Fi roll out, and migration from analogue to digital broadcasting, the country is also struggling.

The year got underway with Nakuru County terminating its partnership with Orange for the roll out of free Wi-Fi connectivity to the county’s residents and businesses after less than a year. Liquid Telecom has now been engaged.

The same confusion presides over the digital migration process, which has been little short of a farce. The country faces a race against time to meet the June 17 global deadline, but uncertainty reigns after eight broadcasters turned off analogue broadcasts while three remain on it. Public confidence in the process is at an all-time low, and even if Kenya does manage to meet the deadline, it seems this will be done by switching off analogue before the majority of households have been able to migrate.

For a country with such technological potential it is truly a shame it has been held back by corruption, incompetence and the ensuing legal wrangles, with the people really harmed being the citizens and consumers of this technology.

The launch of a premier Tier-III data centre by Nigerian network solutions provider MainOne comes at an opportune time, as pressure starts to build for Africans to be able to host websites in their own countries rather than the US or Europe.

MainOne has been building the data centre since 2013. It is the largest of its kind in West Africa and will make it easier for African websites to be hosted on the continent. Its launch coincided with a report released by the Internet Society, which pointed out the lack of local internet hosting available in Africa.

According to the report – which focused on Rwanda as an example – local internet hosting is key to the development of Africa’s technology ecosystem. It is crucial local content is hosted locally in order to bring down costs and improve user experience, but thus far this has not been the case. Initiatives such as MainOne’s, alongside the increased bandwidth provided by undersea cables docking on Africa’s coastline, will go some way to changing this.