International advertising agencies are scrambling to get a foothold in the African continent – described as one of the last great frontiers for the industry. 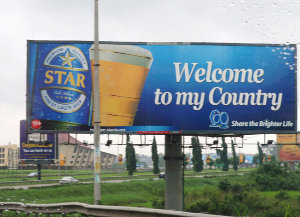 A billboard for Star beer in Lagos, Nigeria

WPP, one of the world’s largest advertising groups, has over the past 12 months announced a string of deals in Africa. Last year WPP’s Ogilvy & Mather formed a joint venture with Kenya’s Scangroup to create Ogilvy Africa, a pan-African powerhouse, according to the company.

“I passionately believe that sub-Saharan Africa is one of the last great frontiers in global communications – and that it will be one of the most fertile,” said Miles Young, global CEO of Ogilvy & Mather, at the time of the deal. “Now is the time to invest, ahead of the curve, just as we have done in other developing geographies. Africa’s growing middle class, its increasing political stability, its fast economic growth and its attractive talent base make it a critical component of any truly global business strategy.”

At the end of December 2010, WPP said that it has also agreed to buy a controlling stake in Nigerian-based Research and Marketing Services group of companies (RMS), one of the largest custom research networks across West and Central Africa. In addition, Ogilvy & Mather announced an agreement to acquire a majority stake in Ogilvy South Africa. Completed, the deal will increase Ogilvy & Mather’s ownership of the agency from a 49.9% to 59% stake.

Martin Sorrell, WPP CEO, last year told the Wall Street Journal that many of their major clients looking for geographical expansion opportunities have Africa and the Middle East high up on their priority list.

WPP is, however, far from the only game in town. Rick de Kock who heads up TBWA’s African operations says competition within the industry is heating up as most of the world’s largest networks are currently represented on the continent, and that locally-owned agencies are also a force to be reckoned with. TBWA, a unit of the Omnicom Group, has 22 offices in 17 sub-Saharan African countries (excluding its presence in South Africa).

De Kock says the economic crisis in the Western world has led to a larger appetite for risk. “Everybody has finally woken up to the concept [of Africa as a business destination] internationally, and I think that was driven in part by the economic slowdown, particularly in the West. [People’s] appetite for risk changed. If they could lose their shirts in America, then the idea of investing in Africa wasn’t so scary.”

Sub-Saharan Africa’s high GDP growth rates, projected at 5.5% in 2011 by the International Monetary Fund, as well as the continent’s population of close to a billion people are also making it attractive for foreign multinationals.

De Kock explains that while previous waves of investment in the continent was predominantly in mining and infrastructure, current interest is focused on consumer goods and services. He cites Indian mobile operator Bharti Airtel’s recent purchase of Zain’s sub-Saharan assets; Wal-Mart’s proposed acquisition of pan-African retailer Massmart, and KFC’s massive expansion plans for the continent as good examples of this enthusiasm for the African consumer. McKinsey estimates that 40% of Africans live in urban areas, very similar to China, and this is increasing. The number of households with discretionary income is projected to rise by 50% over the next 10 years, reaching 128 million.

TBWA’s African division has experienced a steady increase in business from multinationals in recent years, although local brands are also becoming some of its important clients.

De Kock says he is seeing a lot of interest from Indian companies to invest in Africa. “What is really interesting is that you’ve got a lot of Indian brands coming onto the continent. Here everybody talks about China, but India has also got a huge focus on the continent. The Indian investment seems to be a lot more from a brand and consumer point of view,” he explains.

Traditional advertising platforms such as billboards are still very popular in many African countries. In 2009, out-of-home advertising spend in Nigeria was second only to television. However, in the more developed South African market, out-of-home accounts for only a small percentage of overall budgets. A report by OMD South Africa states that only 4.4% of the country’s total above-the-line expenditure during 2009 went to out-of-home.

According to De Kock, mobile phones and the internet will become more important as advertising platforms in Africa. “I think there are two big things . . . one is the rise of mobile phones. If you think 12 years ago there were a handful of mobile phones on the continent. I think you are looking at a penetration now of almost 500 million phones. So that from a marketing point of view is becoming huge in terms of an advertising medium. It also allows you to start building databases, to start to talk to people on a one-on-one basis.

“[The other] big wave is digital. As more of these cables come down the coast of Africa, countries are becoming more connected. I saw an incredible statistic on Nigeria the other day. In 2000, there were about 200,000 Nigerians online, there are now more than 43 million online. They have embraced the technology and are running with it. Africa is really getting connected, and digital marketing is going to be a big wave,” he notes.