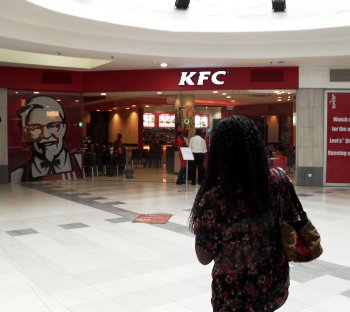 KFC's restaurant at The Palms shopping centre in Lagos, Nigeria

Yum! is owner of restaurant brands such as Taco Bell, KFC, Pizza Hut and Long John Silver. The company operates mostly on a franchise model.

In Africa, Yum! mainly focuses on the KFC brand and currently has around 655 outlets, of which 620 are in South Africa.

The first KFC opened in South Africa in 1971. “We have demonstrated the ability to build a fantastic KFC business . . . in South Africa and . . . [its] neighbouring states,” said Keith Warren, Yum!’s general manger for Africa, during the company’s recent investor and analyst conference.

He said that one of the reasons for KFC’s success in South Africa is the fact that “chicken on the bone is the primary protein of choice in Africa”.

Yum! has identified Nigeria, Ghana, Angola, Zambia and East Africa has priority territories for KFC in 2011.

In Nigeria, the company is planning to open 20 KFC outlets during 2011. “We’ve got six stores there now and we are going to build 20 next year,” said Warren. Yum! forecasts that it will have 300 KFC restaurants in Nigeria by 2020.

The first Nigerian KFC restaurant opened in December last year. “We always knew 150 million people . . . eating chicken on the bone as their primary protein, had to be a good thing for KFC, but we didn’t quite know how good a thing it was going to be,” said Warren.

He explained that the biggest challenges of operating in Nigeria is dealing with the poor infrastructure and bureaucracy as well as finding the right partners.

KFC in Nigeria is currently a joint-venture between an existing Indian franchisee of the company and a local Nigerian.

Ghana is another country for which KFC has big ambitions. Warren is excited about the broader impact that oil production will have on the economy. “I was there in Accra three years ago when there was a rig off-shore that had just found oil. As of this month, December, they are now producing oil commercially. [Ghana] is on the ground floor of enormous growth,” he said. Yum! will build four new KFC outlets in Ghana during 2011 and plans to operate 70 outlets in the country by 2020.

In the East African region, comprising of Kenya, Tanzania, Uganda, Rwanda and Burundi, Yum! expects to open its first restaurant in the middle of next year in Nairobi, Kenya. The company is targeting 120 restaurants across the region by 2020.

In both Angola and Zambia, Yum! has started building its first KFC outlets. It plans to have 60 restaurants in each country respectively by 2020.

According to him, “KFC is desperately desired” in Africa. “If I land at the airport in Dar es Salaam (Tanzania), and the customs folks see a KFC logo on my bag, the first thing they ask is: ‘When are you coming to town? When are we going to get KFC?’ We are very excited about the opportunities.”