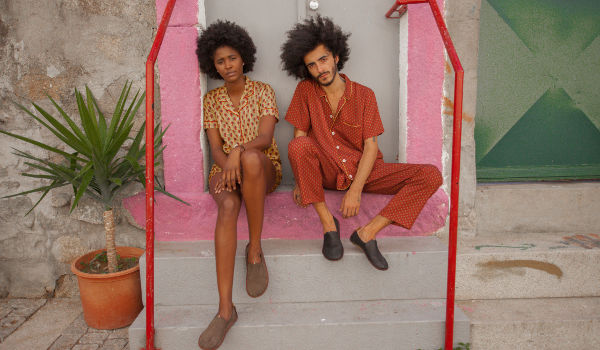 For centuries, unfinished materials for clothing manufacture – silk, cotton, hides – have been sold and shipped from Africa to the fashion capitals of the West, such as London, Paris and New York. In return, a small number of ready-to-wear clothes, cheap shoes and secondhand garments head back to Africa – at vastly marked-up prices or as charity donations.

Now an ambitious startup called the Walls of Benin, led by 30-year-old Chi Atanga, a man of Cameroonian descent born in Manchester, England, seeks to break with history by building factories in Africa that make sleepwear and loungewear – comfortable casual clothing that is stylish and sophisticated, suitable for “all night raves, boats, trains and jet planes”, according to the company’s website. Finished items are sold to high-end shops in Europe for their fashion-hungry clientele.

The brand name Walls of Benin refers to the world’s largest man-made structure, which was completed in the 15th century: a system of moats and ramparts designed to defend the ancient Kingdom of Benin, which is Benin City, the capital of present-day Edo State, Nigeria.

Atanga calls himself “chief evangelist”, instead of chief executive officer, of Walls of Benin, and says that the company’s goal is “to spread soft power through culture”.

Taking on the Goliath

Atanga researched and designed the business plan for Walls of Benin. Buoyed by US$100,000 seed money from the Portuguese government and an apprenticeship with the Erasmus European Entrepreneur Programme, he was able to finance his dream. “Using his gift for networking, Atanga secured an investment from the Lunan Group, the team behind the well-known brand Fiorelli,” according to Face2Face Africa, an online publication.

He is now setting up production operations in a “special economic zone” outside the coastal city of Mombasa, Kenya’s second-largest city.

“Our concept is not about riding the stereotype, Africa-to-Europe, textile/raw materials value chain, but a new paradigm,” he declares. “Can we take on the Goliath Victoria’s Secret on lingerie in Africa?” he asks, and answers with a firm: “Yes!”

How will it work? “Our business model is simple: we take the spirit of African print textiles and swap wax and heavy cloth for more luxurious and ecological fabrics,” he says. Kente, Ghana’s famous silk-and-cotton blend, is an example of an African fabric, while silk and Tencel are natural fibres with extra softness and moisture-wicking properties. “We feel fashion brands in top cities in Europe should manufacture some of their wares in Africa and create jobs, and not merely export jeans, suits and other garments to Africa.”

His first trip to Africa as an adult was to Ghana in 2014, and it was an eye-opener. “Everything was bright, vibrant and alive. It amazed me to see African print textiles everywhere. It dawned on me that this was a part of my heritage.

Currently, Walls of Benin operates from Kenya and Rwanda and it is importing silk and Tencel from Portugal. In April 2018, the company partnered with Wildlife Works, a wildlife conservation group based in Kenya, to launch an African production. The hope is to export luxury loungewear made of extra-soft silk and Tencel to Europe and elsewhere. The production is first of its kind on the continent.

Wildlife Works can manufacture a thousand loungewear items per week using digital screen prints. “From the east of Africa to the south of Europe, we are building the value chain,” enthuses Atanga. He believes that the loungewear fashion industry in Africa, once ignored, has a bright future.

Meanwhile, rapid changes are taking place on a continent that a top British supermodel once chided for not having a Vogue magazine. “Africa’s fashion industry is right now super exciting. It is new, at the same time it is centuries old. We are talking about the 55 countries in Africa and huge diaspora populations with billions of dollars of spending power,” says Atanga.

The rise of the middle class in Africa and partnerships with established foreign brands help boost the fashion industry on the continent. In addition, the African Growth and Opportunity Act (AGOA), a US law that seeks to expand trade and investments with sub-Saharan Africa, “gives duty-free access to the US for selected sub-Saharan African countries,” according to African Business. American companies are looking to invest in Africa’s fashion industry.

Africans can tap into the US$12bn US loungewear market through AGOA, which was recently extended to 2025, maintains Atanga.

His company helps to create jobs by working with eucalyptus farmers and other suppliers who produce raw materials. Eucalyptus pulpwood is industrially spun to produce fabrics that are breathable and cooling.

Also, a dozen local smallholder Kenyan cotton producers have received specialist textile training from Walls of Benin to spin and twist fibre into yarn, weave and knit the yarn into fabric, and bleach, dye and print the fabric to create fashionable sleepwear.

“We chose Kenya because, along with Ethiopia, citizens know the value of a homegrown fashion industry. [These countries] have established training centres to educate indigenous entrepreneurs about diversifying into luxury garments.”

Fashion giants such as Sweden’s H&M also have their eyes on Africa’s fashion industry. With support from Swedfund, the Swedish government’s development financing arm, H&M is establishing a textile factory in Ethiopia that will create about 4,000 jobs. Atanga predicts that with wages rising, many Chinese textile companies will relocate to Africa.

Atanga is pleased that some countries in East Africa want to ban the import of secondhand clothing. Rwanda already has. Tanzania and Uganda were considering the bad, while Kenya seemed poised to, but later backtracked on its decision. Angered by the ban, the US is threatening to exclude such countries from AGOA eligibility status. The ban on used clothing “is a masterstroke”, insists Atanga.

Also, relative political stability and the ease of doing business in East Africa is good for investors, according to the young entrepreneur. “In some countries, one must pay bribes to get the necessary business permits, and electricity supply is pitiful,” he says.

Other challenges abound in the textile industry. “Although African textile has an annual value of $4bn, only 19% of it is branded. We lack adequate finance to patent and effectively secure our fabrics ecosystem. We also don’t want women and children to spend 18 hours in factories while missing out on school,” Atanga adds.

His mixed heritage is inspiring him to use Africa as a backdrop for his investments in the loungewear industry. As a young child he sold bonbons shipped from Cameroon on school playgrounds in Manchester. “I would add my own ‘import tax’, because they were made in Cameroon. They were a little more valuable, being imported from Africa,” he says, smiling.

“I knew that creating a brand that covers African-made loungewear for sale in Europe could be profitable. This drove me to Portugal to work with high-quality tradesmen, brands and garments, and to East Africa.”

On the luxury price point for the pajama sets, he told Face2Face Africa, “We think at £195 ($260) we are being fair. Silk is not cheap and we have taken a lot of time and effort to create a luxury product but at the same time keep the retail price accessible.”

For now, Atanga is focused on his passion for making quality clothes in Africa and exporting them to Europe. “I want to create wealth in the fashion industry in an ethical way,” he concludes.

This article was originally published by African Renewal.