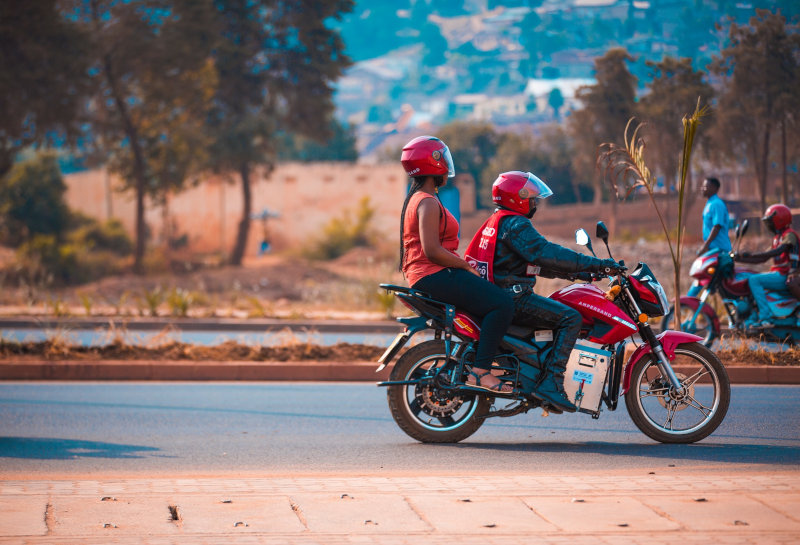 An Ampersand electric motorcycle in Rwanda.

From locally-made to foreign ‘built for Africa’ brands, the continent is staring at the widespread adoption of electric bikes.

There is now a high chance your next two-wheeler vehicle request for taxi or delivery will be powered by a rechargeable battery instead of petrol, as more locally-made electric bikes start taking over African roads.

E-commerce and ride-hailing apps appear to be driving early adoption on the continent as players in these two sectors begin to aggressively replace fuel-based motorbikes.

Up to 3,000 Kenyan designed-and-built electric bikes are now projected to hit the road in Kenya and several other target countries in Africa as early as June 2022, following a strategic partnership between global ride-hailing firm Uber and a Swedish-Kenyan firm, Opibus.

Opibus which is currently developing the electric bikes in Kenya’s capital, Nairobi, said it is betting on Uber’s presence in African markets to accelerate the mass adoption of electric vehicles across the continent.

“We’re seeing a huge demand for locally-designed electric motorcycles on the African continent, and by working with Uber we’ve now been able to prove the feasibility for large-scale deployment. Next year we’re scaling up our production to meet the market demand, both in Kenya and in the region,” explained Mikael Gånge, co-founder and chief sales officer of Opibus.

Uber has a presence in South Africa, Nigeria, Ghana, Kenya, Tanzania, Uganda and Côte d’Ivoire among other African countries.

The company has set 2040 as a target year for the full switch of its business to electric, with the further ambition of becoming a net-zero emissions platform.

“Uber is continuously looking for ways to improve the customer experience, and we have a responsibility to invest in product innovations that are safe, reliable, durable, and environmentally friendly and have a sustainable impact on drivers and cities. This collaboration with Opibus will do just that,” said Frans Hiemstra, general manager, Uber sub-Saharan Africa.

The majority of the 3,000 units, Opibus said, will be deployed in Kenya and the rest will be used for launching the firm in other Africa markets, both in west and southern Africa.

In November, Africa’s biggest e-commerce platform, Jumia, announced it had begun replacing ‘hundreds’ of the fuel-based delivery motorbikes used by its riders, through a partnership with a Kenyan start-up eBee Africa.

Jumia described the decision to switch to e-bicycles as consistent with the firm’s effort to be an environmentally conscious organisation.

“This pilot with eBee is the beginning of a conscious push across Africa into EVs. We hope we can play a part, as early adopters, in speeding up the penetration of the industry in Africa,” said Jumia services country manager, Ankur Agarwal.

With a four-hour charge, eBee Africa managing director, Olivia Lamenya, said the electric bikes can last an entire day of deliveries, and save costs for riders and final consumers. eBee targets to put one million green bikes on the road in sub-Saharan Africa by 2030.

In Rwanda, startup, Ampersand plans to scale up the number of electric motorcycles from its current fleet of 56 drivers on the country’s roads to ‘several thousand’ and also grow in the Kenyan market, by end of 2022, as it eyes the potential to electrify the around five million fuel-powered motorcycles in East Africa.

Another Kenyan startup, Ecobodaa, with a similar business model to Ampersand, began the production of its electric bike brand in November as it ramps up the roll-out of battery swap stations across the country. Ecobodaa is betting on a rent-to-own business model to boost uptake.

The African market is also attracting investors from other markets outside the continent, with the latest hailing from Asia. In July, Indian electric vehicle maker, One Electric, announced the start of deliveries for its motorcycle brand, Kridn in Kenya, with plans to expand to four more African countries in 2022. One Electric appears to be in direct competition with Opibus, though its target market may be slightly different.

While Opibus boasts of a robust frame and dual swappable battery packs that provide a perfect product-market fit, One Electric says its motorbikes are designed for tough road conditions, heavy loading and high temperatures.

All these brands promise a significant reduction in fuel and maintenance costs, with Opibus saying users of its bikes experience a cost reduction of more than 60%, in comparison to a traditional internal combustion engine motorcycle.

As competition for the deployment of electric motorbikes looks set to heat up in 2022, Africa could see big savings – both financially and environmentally.