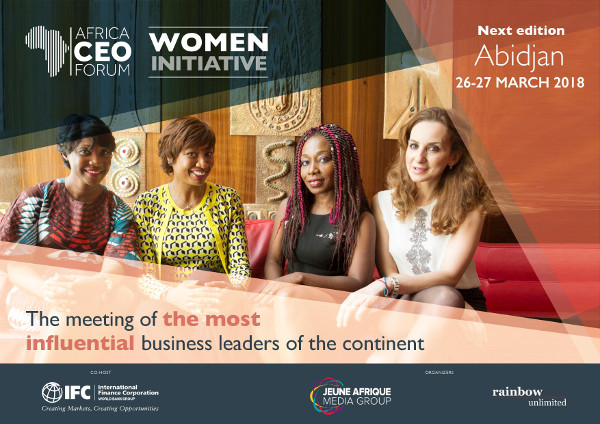 On international women’s day in 2018, the Africa CEO Forum, which takes place on 26 and 27 March in Abidjan, unveils its three high-impact events bringing women’s leadership to the fore:

Launched during the 2016 edition, the Africa CEO Forum’s Women Initiative, in partnership with NSIA, is ramping up efforts to accelerate women’s leadership in Africa this year.

The first of these high-impact actions is the Women on Board drive, which began ahead of the Africa CEO Forum with the aim of promoting African women’s access to the highest level of corporate decision-making: the board of directors. The operation is being rolled out in two phases: firstly, identifying the African women leaders qualified to join boards of directors and the companies that want to “feminise” their board of directors; and secondly, to foster networking during and after the forum.

The second is having Nigeria’s Folorunso Alakija, vice president of Famfa Oil and Africa’s second-richest woman, open the panel dedicated to showcasing the exceptional careers of inspiring women leaders. She will present and explain the keys to her success and her recommendations for promoting women’s leadership in Africa.

Last, but not least, for the 80 women lucky enough to attend, is a workshop dedicated to top-level personal development, led by consulting firm McKinsey.