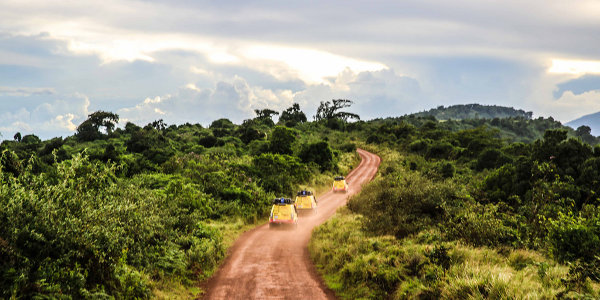 A team from DHL is driving across Africa in three Land Rover Discoveries, while capturing every step of the journey on film, in photographs and words, and then sharing this content with Africa and the world.

Africa Day 2015 (celebrated on Monday) is an opportunity to celebrate the development of the African continent as well as consider the various opportunities that it offers. This is according to Charles Brewer, Managing Director of DHL Express Sub-Saharan Africa (SSA), who not only believes that the continent offers vast opportunities but also that it is one of the last frontiers for economic growth and development.

Africa Day is the annual commemoration of the founding of the Africa Union (AU), and acts as a reminder of the continent’s rich culture, diversity as well as its resilience and the various developing economies on the continent.

Brewer explains that as DHL Express has been present in Africa for 37 years, the company has witnessed the turnaround from the ‘forgotten continent’ to ‘Africa Rising’, which has been an amazing and insightful experience.

“Despite the recent prediction by the World Bank that economic growth in Sub-Saharan Africa will slow in 2015, the continent still remains relatively unexplored which indicates untapped opportunities in the region. We remain positive about Africa’s potential and believe that it’s time for the continent to focus on the opportunities, connect across the continent to leverage cross-border and global opportunities and grow as one.”

To meet the increased needs of the burgeoning middle class in the region, DHL Express has continued their aggressive expansion strategy in their efforts to make logistics more accessible. “With the rise of e-commerce, global markets are more attractive and accessible to individuals and local businesses, therefore we need to make sure that we are well positioned to cater to their needs. We currently have 3,800 retail outlets across Sub Saharan Africa,” adds Brewer.

In the spirit of Africa Day, Brewer also points to one of the many projects conceptualised and implemented by DHL Express on the continent – DHL Africa as One – which highlights the company’s continuous commitment to investing in Africa. “As part of this epic journey, a team from DHL, the official logistics partner of Rugby World Cup 2015, is driving across Africa in three Land Rover Discoveries, while capturing every step of the journey, every person, every place and every pass on film, in photographs and words, and then sharing this content with Africa and the world. Part of the journey includes passing a single rugby ball from hand to hand through 45 African countries, over 11 months, from Cape Town and ending in London in September 2015.

We have passed the half way mark and the team is currently in Niger, en route to Chad. The tour is not just about rugby, but about showcasing Africa to the rest of the world and making an impact on the continent. In addition to the rugby clinics that take place as part of the journey, we are distributing over 500,000 units of stationery to young children and providing free eye tests for thousands of people, through our partnership with Mercy Ships.”

More than ever, global companies are now looking to expand into Africa and invest in its diverse markets and people. “DHL is committed to play a continued role in developing the continent through its investments and initiatives aimed at connecting Africa to the world,” concludes Brewer.