South Africa-based bank Absa is opening a representative office in Nigeria in a move CEO Maria Ramos says is not a late entry into Africa’s most populous nation. 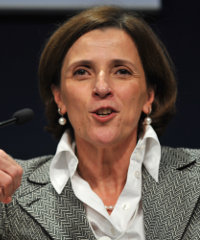 Rather, she says, it is a calculated strategy not to blindly follow rivals, some of whom have registered to buy distressed banks rescued from collapse by the Nigerian central bank.

Local rivals FirstRand and Nedbank have already publicly confirmed they would be keen to consider investing in some of the banks.

Ramos says while Nigeria was a potentially lucrative market, Absa would not rush to invest for the sake of “raising our flag”.

It had received regulatory approval to open an office in the country, giving it a foothold in what is potentially going to be the next major growth market – together with Angola – for investors.

“We are expanding in a measured approach taking into account that each country is different [and] has different dynamics, and will need different products and investments,” she says.

“We got a licence to open there a month ago and we should be up and running in the next few months. We will continue to look for appropriate opportunities that are able to provide value and that meet the objectives of the organisation,” Ramos says.

“We did not register for the distressed bank process; not that we forgot, but [because] we took a long and hard look at it and we did not think it was the only option [to enter Nigeria]. There are other opportunities under consideration,” she says, without elaborating.

Ramos says Absa is already a major player in Africa, particularly when one considers its partnership with its UK-based parent, Barclays, which operates in several countries on the continent.

“Between Absa and Barclays, we are pretty much in many countries, even though in some markets it’s only Barclays represented. As Absa, we are currently in Mozambique and Tanzania, and we work together in Botswana,” she says.

“Ultimately, Angola will come in the picture at some point when the time is right [and] when the business opportunity is good,” Ramos says.