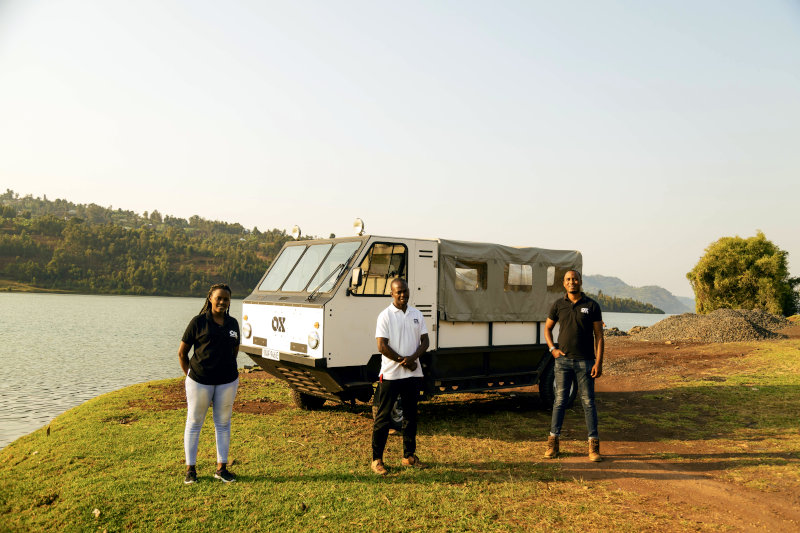 The OX Delivers Rwanda team with the company’s specially-designed truck.

James Torvaney spoke to Simon Davis, managing director of OX Delivers, to understand the company’s unique business model and the opportunities for haulage-as-a-service in Africa.

Birth of the OX

In 2013, Sir ​​Torquil Norman, the British pilot and toy entrepreneur famous for creating the Polly Pocket line of dolls, amongst other brands, founded the Global Vehicle Trust to provide cost-effective mobility for people in the developing world.

The result of this was a truck that could be shipped in flatpack form and quickly assembled on location, with interchangeable and easy-to-maintain parts, and features specifically designed to cope with rough dirt roads.

The OX as a service

Over the years, the business has evolved into a service company, which currently operates eight vehicles in Rwanda. Rather than selling the vehicles themselves, OX Delivers sells space on its trucks to market traders and anyone else looking to transport goods from one place to another. “We move everything from cows to coffins,” says Davis.

Each OX vehicle can carry up to 2 tonnes of goods at a time, and travel around 150km a day, which is typically made up of shorter journeys between 3-15 kilometres per trip, usually to and from marketplaces. Smaller customers move around 50 kilograms of goods over a single trip, whereas larger clients can transport over 100 tonnes each month. The majority of the drive time is spent on dirt roads and Davis says that the main competition comes in the form of bicycles, which are slow and have a limited load capacity, and conventional trucks, which generally require much larger minimum payloads and are often unwilling to travel to the more rural areas.

Coordinators, who know the trucks’ movements in advance, go to markets and talk directly to customers to book space on the trucks. Other customers book directly by phone. Davis explains that “the drivers are the most important people in the business – they don’t just drive, but spend a lot of time meeting and talking to the customers”. 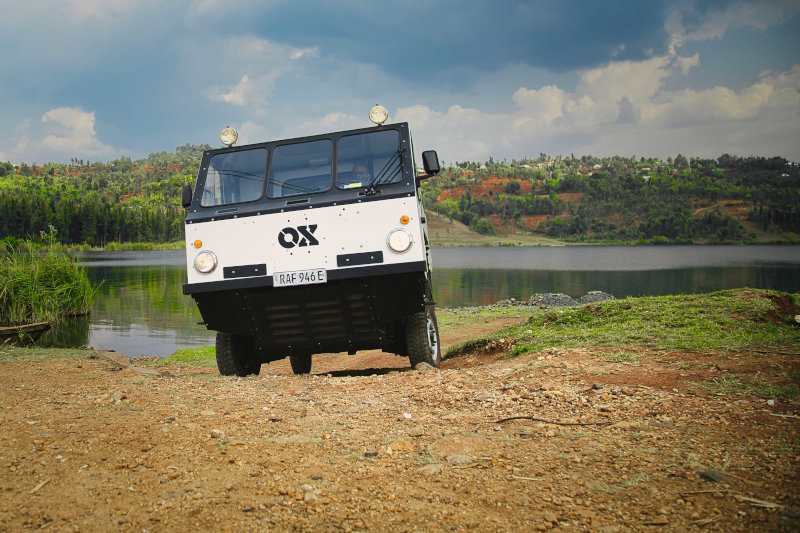 The OX truck is designed for off-road conditions.

Not the traditional carmaker model

The company realised early on that the traditional carmaker model of selling vehicles wouldn’t work in Africa, so it moved into transporting goods as a pay-per-use service. “It’s a completely different mindset – it allows you to focus purely on functionality.”

Davis, who spent 16 years working at Jaguar Land Rover before becoming OX’s first full-time employee in 2019, explains that in developed markets, car manufacturers recoup their large research and development costs by selling new cars to a relatively small, and wealthy, segment of the market. “In the west, we’ve been sold this story about how your car is an extension of your personality. The focus over the last few years has been on incremental improvements to things like comfort and connectivity.”

In African markets, however, the market is very different. “An exceedingly small number of people buy brand-new cars. The majority of the population just want to move things from A to B at as low a cost as possible.” The small addressable market and lack of interest in the more luxurious and higher-margin features, make the market unattractive for most vehicle manufacturers.

A focus on simplicity

“The great thing about our vehicles is the simplicity. Everything is designed to be predictable and easy for us to maintain,” Davis explains. “We use the same suspension, and the same doors, on both sides, so we can carry fewer spare parts. The drivetrain uses off-the-shelf components from big suppliers that are easy to find.”

The OX vehicles also use 2-wheel-drive transmissions, as the added cost and complexity of 4-wheel-drive outweighs the limited potential benefit. Instead, the OX focuses on features that provide more effective return on investment. “The biggest impact on performance is tire size, so we use the largest tires possible.” The vehicles are also built with high ground clearance and steep ramp angles.

All the vehicles use electrical drivetrains, which are far more efficient and cheaper to run than fuel-based engines. There are fewer parts to worry about, no oil to refill, and no belts to replace. “An electric engine is about 90% efficient, compared to around 40% for an internal combustion engine.”

In contrast to personal cars, the OX vehicles are not greatly restricted by electrical infrastructure – every day the vehicles come back to the same place, where they can be charged. So there is no need to rely on a distributed network of chargers.

What’s next for the OX Delivers?

OX has averaged around 45% month-on-month customer growth over the last year and successfully closed a $3.4 million seed funding round in January 2022. “The focus right now is on demonstrating the model in Rwanda, before we look to expand across the continent.”

Davis notes that whilst there are a number of mobility-as-a-service companies focused on transporting people, there is still relatively little competition in the haulage-as-a-service space. “There are still a lot of people stuck with western models that are not designed for this environment.”