The Investing in African Mining Indaba, held this week in Cape Town, saw many from the government and private sectors debate the notion of a resource curse in Africa. According to economist and Rhodes University professor, Gavin Keeton, it is easier to find articles about how the discovery of coal is a risk to Mozambique’s economic future than it is to find articles highlighting its benefits. 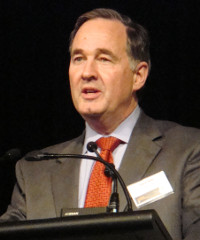 “Why is there such a negative view of the industry in terms of its contribution to growth? One of them of course is environmental, where the industry is viewed very negatively. But there is also a negative view of mining which is deeply embedded in economic thinking, and this comes from two articles that were written by Sachs and Warner… in which they popularised the resource curse,” highlighted Keeton. “And I think there [are] few economic articles that have had such an impact on popular discourse as the Sachs and Warner article.”

He explained that the article made a comparison of per capita economic growth and natural resource endowment and found a negative relationship between these.

“And this was very quickly taken up in popular discourse and I think still feeds thinking today,” said Keeton, adding that mining has undoubtedly played an important role in Africa’s growth.

Roger Baxter, chief operating officer at the Chamber of Mines of South Africa, agrees. “Minerals are not a curse provided countries pursue the right governance structures both in the private sector and in the public sector. They can certainly be the best boon for development and so I am certainly of the view that the resource curse is only for those countries that don’t pursue those right sorts of policies,” Baxter said during a panel discussion at the Mining Indaba.

Africa’s growth story based on its growing extractive industries

According to David Hale, global economist and founding chairman of David Hale Global Economics, only four countries in Africa will have growth rates below 3% this year. While sub-Saharan Africa is seeing continued positive growth, expected at around 6% this year, a large portion of Africa’s population remains poor and a lot of Africa’s growth and investment is reliant on its wealth of natural resources.

The great commodities super cycle seen over the last decade, alongside Chinese economic take over, has most notably played a significant role in Africa’s growth.

An obvious result of this commodities super cycle is an increase in trade, which Hale said has gone from US$200bn per annum in the 1990s to now just under $1tr.

Africa’s wealth of resources has also seen an increase in foreign direct investment (FDI), generally from Asia and more specifically from China.