Should African countries be condemned to digging holes in the ground and exporting unprocessed oil, gold, iron and other natural resources? 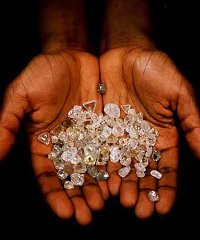 Botswana’s government and mining giant De Beers have agreed on two ways to add value to the country’s diamonds.

For the better part of a decade, the international community has advised African countries not to add value to their raw minerals, a process better known as beneficiation. But most African policymakers have refused to accept that this development model is sustainable.

The World Bank has put considerable resources and research into trying to convince Botswana not to beneficiate its diamonds, Zambia its copper or South Africa its gold, chromium, platinum and other minerals. Along with the OECD, an intergovernmental think-tank based in Paris, and other opponents of beneficiation in Africa, the World Bank offers two main alternatives.

Their first and favoured proposal is to forego forging forward linkages with the mining sector through the beneficiation of unprocessed minerals. Instead, African countries should emulate Australia and Canada, mining-intensive economies that have developed strong backward linkages with engineering, services and higher education.

Backward linkages are channels through which a company or an entire sector connects with its suppliers and creates economic interdependence. Forward linkages, by contrast, are distribution channels that connect a producer with its customers.

The backward-linkages alternative has one serious flaw, however. Most smaller African countries do not possess the resources or the economies of scale to cultivate the networks found in those mining titans.

The second alternative is that countries should diversify their economic base through sovereign wealth funds and earn high returns on their investments.

Neither forward nor backward linkages will work, according to this argument. Small African economies will never compete with mining giants when it comes to developing backward linkages, nor with processing behemoths, such as China, when it comes to beneficiation. Globalisation has eliminated any possibility of these mineral-based economies undergoing a traditional transformation.

Faced with these constraints, where do most African countries go? Unfortunately the answer is neither backwards nor forwards nor outwards, but downwards. African countries are currently making ever-deeper holes in the ground, with the extracted minerals and their monetary fruits being used more or less prudently depending on a country’s internal political management.

The example of Botswana

Botswana, the world’s largest producer of diamonds by value, has in the past several years moved on two fronts to reap the precious stone’s economic benefits. In a 2011 marketing agreement, Botswana’s government and De Beers – the world’s leading diamond company, of which Botswana is 15% owner – agreed on two ways to add value to the gems.

The first was for De Beers to move its supply and sale of diamonds from its offices in London to Gaborone, Botswana’s capital, a transfer that was completed in December 2013. As a result, about 160 positions have relocated to Botswana, industry insiders estimate. Half of the new jobs have gone to locals.

The second part of the 2011 agreement called for Botswana to supply some US$500m worth of rough diamonds a year to local cutters and polishers, with the explicitly written expectation that this would grow to some $800m by 2014.

Still, the value of the exports was some $600m, making diamond cutting by far the country’s largest industrial sector. For a small country of 2m people, such a new and non-traditional export can be considered an overall success. Challenging questions remain, though. The first concerns the sector’s sustainability.