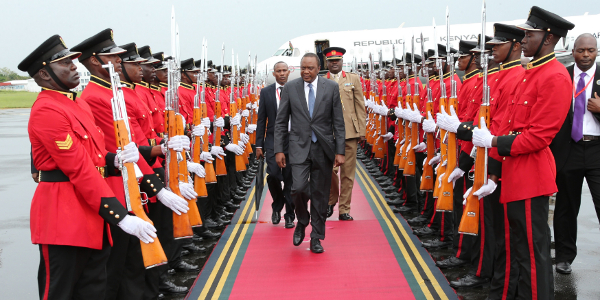 Kenyan President Uhuru Kenyatta arriving in Tanzania during a 2015 visit.

This year will see a number of presidential elections take place across Africa – with Rwanda, Kenya and Angola being key markets to watch.

How we made it in Africa talks to experts at the Institute for Security Studies (ISS) about how these upcoming polls could affect foreign direct investment in the respective economies.

A third term for Rwanda’s president

At the beginning of 2016, Rwanda’s President Paul Kagame announced he will be running for a third seven-year term. This followed a referendum in December 2015 where 98% of voters agreed to modifying the constitution to allow Kagame to do so. Once this term is served, Rwanda’s presidential terms will be reduced to five years, and once again limited to two terms. But this only comes into effect in 2024, meaning that Kagame could run for a fourth and fifth term – ruling until 2034.

Many question the validity of the outcome of the constitutional referendum. Kagame has been criticised for not enabling freedom of political expression or association, and some believe he silences political opponents and critics. It is for this reason it is widely accepted that he will win his third term in the presidential elections set to take place on 4 August 2017.

However, Stephanie Wolters, head of the ISS’s Peace and Security Research Programme, notes that Kagame has managed to convince international business community and investors (mostly) that the system he is running is central to the success and development of Rwanda.

Since the 1994 genocide that resulted in the mass murder of hundreds of thousands of Tutsis, Rwanda has made huge development strides – much of which can be accredited to Kagame’s leadership. Infrastructure investment, an improving business environment (it is one of the easiest places to do business in Africa) and low levels of corruption are just some of the reasons why foreign investors have been attracted to Rwanda in recent years. And Kagame is often celebrated for reforming the country.

“Now that is not a position that everybody shares, but it is certainly something that Paul Kagame has put forward very strongly. And I think he has done so successfully to the extent that he wasn’t heavily criticised [when he announced his bid for a third term]. Some countries like the US did come out quite clearly against his referendum and another mandate for him, but on the other hand you have international organisations and international investors still very interested in Rwanda,” she continues.

“You still have organisations, like the World Economic Forum for example, holding key meetings in Rwanda and therefore, by some extent, endorsing Kagame and his policies.”

She concludes: “I don’t think in the context of Rwanda that Kagame going for another mandate will have a negative effect on investment in that country.”

A wait-and-see game with Kenyan elections

Kenya is preparing for its general election on 8 August 2017 and already there is political tension and distrust in its ability to host free and fair elections. The country has a history of election violence, which some fear will be repeated this year. It saw ethnicly-targeted violence erupt after elections held in 2007, which left over 1,000 people dead and hundreds of thousands misplaced.

Last week 15 opposition parties launched a coalition dubbed the National Super Alliance (NASA) to face off against the Jubilee Party of President Uhuru Kenyatta (who is seeking his second term). They will front a single candidate, although no one has been named yet. Among key members is the former prime minister, Raila Odinga, who has lost three elections and disputed the results in both 2013 and 2007.

“The years in which Kenya holds elections have traditionally been volatile ones,” says Wolters. “We don’t really know how this is going to play out.”

There have also been protests over an electoral law which states the Independent Electoral and Boundaries Commission (IEBC) can use a manual voting system if the electronic system doesn’t work. The aim is to prevent a repeat of the 2013 election, when the electronic equipment failed on election day – but some believe the new law is a way to cheat the ballot.

“I think there is no question that in Kenya the electoral process does lack some credibility – that can always lead to contestation and in Kenya we can see that turn violent. So if I was an investor looking at increasing my operations or starting my operations in Kenya, I would probably wait till after the elections to see what happens there. I do think that will have an impact on how people see Kenya,” she explains.

“Of course there are some investors who are large enough to withstand a little bit of political violence and protests and so on, but I think it will [cause] people to pause and will be an issue of concern without question.”

The drop in global commodity prices has led to major economic challenges that have deferred investment in key commodity-exporting markets such as Nigeria. But Kenya has performed comparatively well due to its more diversified economy. However, Peter Aling’o, office director and senior researcher at ISS’s Governance, Crime and Justice Division, notes that corruption in Kenya has worsened in recent years and resulted in investors choosing other east African economies – such as Rwanda and Tanzania – over Kenya. He believes investors will watch to see if this is dealt with in the next presidential term.

Last month Angola’s long-standing president, José Eduardo dos Santos, announced that he would step down from office – after 37 years of ruling the country. But it is unlikely that this will change much in the oil-rich economy. The ruling party – the Popular Movement for the Liberation of Angola (MPLA) – has appointed Defence Minister João Lourenco as its next leader.

“It doesn’t mean that the ruling elite will change… There are a lot of different fault lines, but we don’t see, at this point, an internal successor in the MPLA who represents a departure of practices of the past,” says Wolters.

However, she argues this might be preferred by foreign investors – as predictability is favoured over uncertainty when it comes to investing in a country.

“If on the other hand we see around the elections there are a lot of protest movements from the population, civil society and the political opposition… that could represent an immediate security threat and change the way in which the election takes place. So I think there are a number of different elements that investors will be looking at.”

However, she adds that if an anointed successor of Dos Santos is elected, the current status quo in Angola will likely continue. “And investors, I would imagine, will be quite happy with that.”