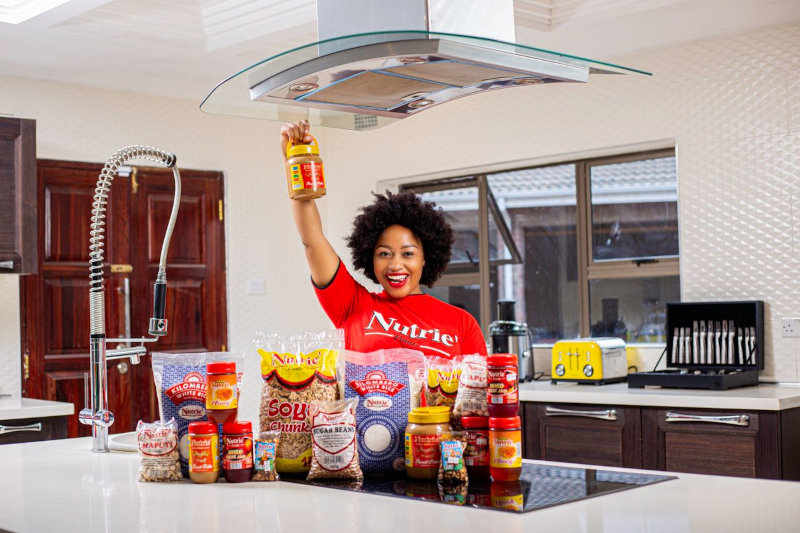 Nobukhosi Ndlovu launched Nutrie Foods in July 2013 in Harare, Zimbabwe. At the time, she was employed as an HR consultant and had a few small businesses on the side, but she always had a dream of commercialising the production of the peanut butter her mom had made at home in the rural community of Zhombe. Today, the company manufactures peanut butter, mixed fruit jam and marmalade. It also packages honey, sugar beans, soya chunks and rice under its brand, which is sold in various supermarkets and smaller local stores in the country. Jeanette Clark speaks to Ndlovu about the challenge of getting consumer packaged goods on supermarket shelves and the growing demand for healthier food.

No finance, no equipment

Ndlovu’s first hurdle was securing the finance needed for the equipment required to produce peanut butter on a commercial scale. “I did the research and determined I would need equipment to the tune of US$20,000,” she explains.

And so, the knocking on doors began but traditional banks had no good news for her; they required collateral that she did not have. Finally, a friend referred her to a microfinance institution co-founded by two Zimbabwean women and Ndlovu set off to secure an appointment. On day one, however, she was blocked by the gatekeeping receptionist. Undeterred, she returned the next day and her spirited and loud debate with the same receptionist got the attention of the CEO who was in the building.

“She asked that the receptionist let me in and, armed with my business plan that outlined the funding required for the equipment, which could then be used as collateral for the payments, I got the loan,” says Ndlovu.

Nutrie Foods moved its operations into a small rented warehouse in Willowvale, an industrial suburb in Harare, that had three-phase electricity to run the equipment.

“In the beginning, I was everything in that business. I sold my car and bought a small delivery van. In the morning, I would buy groundnuts at the farmers’ market, then I would go to the warehouse to manufacture and bottle the peanut butter and, around 5pm, I would visit the local tuck and spaza shops to sell the product,” she recalls. “The next day, the revenue earned from the sales would be used to repeat the routine.”

The microfinance company noticed her diligent repayments on the loan and granted her another loan for working capital.

The headache of getting into retail stores

Ndlovu readily admits that getting her products listed was her biggest battle. (She once posted on Facebook: “Producing a product is easy; getting it to market is death.”)

To supply these stores, Nutrie Foods’ capacity needed to be ramped up, so for the first year, Ndlovu did not even approach the bigger supermarkets, making sure to establish the operation first. However, once she did approach them, there were many requirements and demands.

She had to deal with requests to change her labelling and packaging and overcome the hurdle of paying a listing fee of $2,500, capital she simply did not have as a new start-up. “I tried to negotiate and offered to provide the value of the listing fee in stock, but to no avail. When I look at it now, it was hectic and I felt like I was running around to please them but it was absolutely worth it. Supermarkets are where the money is made in a business where your margins are small and you have to push volumes.”

It was only in 2018, a week before her birthday, that the first big retailer gave her the news that Nutrie Foods would be listed. “I said to myself, this is my present! I don’t need anything else!” she remembers.

Ndlovu highlights another breakthrough for business growth. In 2016, she was selected to join the Mandela Washington Fellowship as part of the Young African Leaders Initiative (YALI). She spent some time in the US and got the opportunity to present her business plan in a competition. The announcement that she was one of the winners came with the very welcome prize of a $25,000 grant.

“That grant changed my life because I used it to empower the women who were supplying me with groundnuts. I was able to obtain seed and fertiliser for them to increase production. At the time, we were doing about one tonne every 24 hours, and then we moved it up to three or four tonnes per shift.”

The fact that Nutrie Foods could show a successful processing facility with this increased output meant that it was able to approach banks for further loans from a stronger footing. “I had property, I had shown growth. I managed to get a loan and buy a new production line in 2018 that does 10 tonnes per shift and is automated,” says Ndlovu. Currently, the plant can produce about 12,000 bottles of peanut butter per day.

Ndlovu added additional products to her line-up almost immediately after starting the business.

“When at the market to get groundnuts, I would see some of the farmers had honey to sell. The honey did not require much from me as I already had the peanut butter containers that I could use.” In the second year, Nutrie Foods simply added sugar beans when purchasing the honey and groundnuts from the farmers.

Over the years, products like jam were added, which did require a bit more value addition and processing, and in 2019, Nutrie Foods began importing Kilombero rice from Malawi to package under its brand for sale as a premium rice product.

While the brand is still best known for its volume-seller peanut butter, it is not the company’s most profitable product. “It remains our fastest-moving product but honey brings in a bigger profit. The rice, as a premium product, also has better margins, but it is on the expensive side, whereas the peanut butter is an affordable commodity.”

According to Ndlovu, Covid-19 undoubtedly had an impact on consumer behaviour. Honey sales were driven up by an increase in health consciousness and an awareness of the benefit of honey and ginger for certain symptoms of the virus.

“Many people changed to healthier diets. They were buying peanut butter to use as a cooking alternative for oil and drinking honey in their tea,” she says.

The trend is so pronounced that Nutrie Foods is investigating healthier grains for its product offering. “People have stopped consuming the heavy maize meal dish of sadza. We are looking to add finger millet.”

After the purchase of the new plant in 2018, Nutrie Foods investigated the certifications required to export its products. The advent of the pandemic in 2020 put these plans on hold for a while although Ndlovu believes it’s high time to restart that process.

“With our natural products, I think we would have a market everywhere, but the plan is to first look towards our neighbours in the African region,” she says.