Alcoholic beverages companies generally like to make a big fuss about their corporate social responsibility initiatives and contributions to local communities. 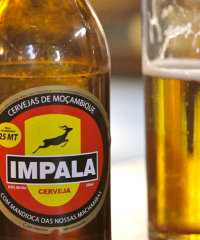 One project that is, however, truly remarkable is SABMiller’s cassava beer recently launched in Africa. Not only does the product generate revenue for the company, but it also creates opportunities for small-scale farmers.

About 18 months ago SABMiller first revealed the Impala brand in Mozambique, the world’s first commercially-made cassava beer. Last month the company rolled out the concept to Ghana, where the beer will be brewed by SABMiller’s local subsidiary Accra Brewery Limited, under the ‘Eagle’ brand name.

Cassava is a woody shrub with an edible root that looks like a large sweet potato. It is widely grown in many parts of Africa, produced largely by small-scale farmers.

Although cassava roots can be processed into a variety of products – including cassava flour, starch, ethanol and glucose syrup – the crop has not been a great commercial success in Africa. The reason for this is because around 70% of the root consists of water, which makes it uneconomical to transport over great distances. While the cassava root can stay in the ground for many years, once it is harvested, it needs to be processed very quickly before it goes bad. Cassava processing plants therefore need to be situated close to the growing areas.

To overcome this challenge, SABMiller has partnered with Dutch organisation DADTCO, which has developed a mobile cassava processing unit that can travel to the cassava growing regions. Basic processing is therefore done in the rural areas.

The initiative will give smallholder cassava farmers in Ghana a guaranteed market for their crops. Accra Brewery predicts that it will source cassava from as many as 1,500 small-scale farmers within the first year.

“It is estimated that more than 70% of Ghanaian farms are 3 hectares or smaller in size and many of these grow cassava. However, there is currently an annual surplus of around 40%,” said Adjoba Kyiamah, corporate and legal affairs director at Accra Brewery.

Eagle is mainly targeted towards low-income consumers. “It will be sold at a 30% discount to mainstream lagers, offering an affordable, high quality alternative to the informal or illicit alcohol that they might otherwise drink,” said the company in a statement.

The majority of alcohol consumed in Africa is still in the form of home-brews or illicit liquor. An opportunity therefore lies in luring these consumers into the formal beer market. The idea is that as incomes rise, these consumers will move onto higher priced brands. SABMiller, the world’s second-biggest brewer, has therefore introduced ‘affordable beer’ as part of its overall product offering.

But how is the company able to offer beer at a price of 70% of mainstream lager?

SABMiller has agreed on a reduced excise rate with the Ghanaian government in recognition of the use of locally-sourced commodities.

“What we do is we negotiate with governments to try and persuade them to drop the excise regime for a product that’s made with local grains, which most governments are quite supportive of. The idea here then is to try and create a win-win proposition, where we have a strong group of farmers contracted to producing grains for us of whatever form. The government gets a new source of revenue … And of course we win in that. We’re able to open up this category and potentially bring consumers in earlier into the beer category than they otherwise would,” said Mark Bowman, managing director for Africa at SABMiller, during a presentation in London last year.