For Rwanda to become an emerging middle-income economy, it will need to unleash its export potential. The country has a natural comparative advantage in services, including tourism, and can serve as a gateway between Anglophone East Africa and Francophone Central Africa. But Rwanda can only reap these benefits if it integrates with its neighbours. 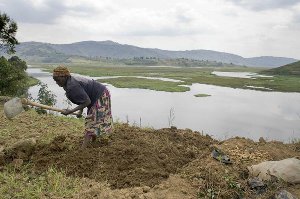 Rwanda has a good opportunity to become a regional food exporter.

Regional integration can bring substantive benefits to all East African Community (EAC) members. But will progress affect all countries in a similar fashion? The answer is no. Three countries are landlocked (Burundi, Rwanda, and Uganda), and two are coastal (Kenya and Tanzania). Kenya’s GDP (PPP) is similar to Tanzania’s, but 5 times that of Rwanda and almost 20 times that of Burundi. Tanzania’s population density is around 50 people per km2, whereas Burundi‘s and Rwanda‘s are 325 and 430 respectively. Some countries have important oil (Uganda) and gas (Tanzania) reserves and others (Rwanda) are importers. The challenges and opportunities created by regional integration will be dramatically different across countries in the EAC. Therefore, the agenda that countries should follow to maximize the opportunities and minimize the challenges of integration should also be different.

Unlike EAC exports outside the region, which are mainly commodities, the bulk of intra-regional exports are manufactured goods (food products, beverages, cement, etc.) – and some of these could be good candidates for Rwanda’s export diversification.

For example, Rwanda’s beneficial climate conditions and recent success in increasing agricultural productivity provides it with a good opportunity to become a regional food exporter. Informal cross-border trade is already dominated by agricultural products. Potential benefits which could be multiplied with intensified attempts to facilitate trade by making borders thinner. In 2011, informal cross border exports accounted for 15% of total exports, higher than tea exports (Rwanda’s third largest export). While Rwanda ran a formal trade deficit with its four neighbours (DRC, Burundi, Uganda and Tanzania) in both 2010 and 2011, for informal trade Rwanda ran a trade surplus in 2010 and in 2011. Over 50% of total informal cross border exports are traded with the DRC through big bordering urban centres (Goma and Bukavu). Locally produced foods and beverages are the mostly traded goods.

Increased intra-EAC trade in agriculture could contribute to the region’s food security. The production of food staples for growing urban markets and food deficit rural areas represents the largest growth opportunity for regional farmers. Africa’s demand for food staples is expected to double by 2020, primarily in cities. As agricultural resources are not allocated equally across EAC countries, or even within them, borders often artificially demarcate food surplus areas from food deficit ones. Regional trade integration can have a substantial impact by better linking farmers to consumers across borders, and in ameliorating the effects of periodic national food shortages and increasing global food prices. At this stage, however, regional trade in food staples remains far from free, despite efforts at policy and regulatory harmonisation. The arbitrary and erratic imposition of barriers undermines private sector confidence to invest and distorts incentives towards cash crop production away from food staples.

Birgit Hansl is a senior economist for the World Bank in Rwanda.