Choppies is a multinational grocery and general merchandise retailer that was born and bred in Botswana. Over the last 15 years the company has grown from having just two stores, to over 120 in three southern African countries. 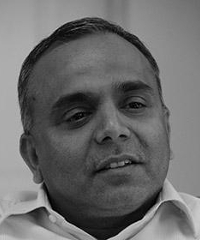 “If you take the talent pool available [in Zimbabwe], it’s the best you can get on the continent,” said Ram Ottapathu, CEO of Choppies.

The retailer expanded into South Africa towards the end of 2008, and most recently into Zimbabwe in 2013. It is also now Botswana’s largest retailer, and its success won it the Transformational Business Award at the 2014 Africa Awards for Entrepreneurship.

Within just 18 months of operating in Zimbabwe, Choppies has already grown to 18 stores, with the company seeing potential to expand to over 30 this year.

According to its CEO, Ramachandran (Ram) Ottapathu, the decision to venture into Zimbabwe was partly based on the fact that competition in the market is slim. The country’s recent history of political and economic instability has lowered investor confidence and resulted in multinationals being more cautious about entering the country.

However, while Ottapathu agrees the political and economic uncertainty is a clear risk, he argues the market still offers strong opportunities that Choppies simply could not ignore. In addition to a growing consumer demand for formalised retail, he believes the country has the best pool of talent in Africa.

“If you take the talent pool available there, it’s the best you can get on the continent. So it’s much easier doing business, especially if you are a retailer employing a lot of people, and your manpower quality therefore counts a lot,” he told How we made it in Africa. “We get the right quality people.”

He added that South Africa, which is generally considered a less risky market than Zimbabwe, had a difficult year in 2014 with worker strikes in the first half. This had a negative impact on Choppies’ overall performance in the country, although he noted there had been an improvement towards the second half of the year.

However, in Zimbabwe, there are supply chain challenges that the retailer faces. For example, it can source 55-60% of its products locally, and the rest has to be brought in from South Africa.

Zambia and Tanzania next

According to Ottapathu, 2015 should see Choppies enter two new African countries, starting with Zambia, followed by Tanzania. Reasons include the demand for formal retail in both countries, and their proximity to Botswana.

“If you take the formal retail penetration in Zambia, it’s still under 20%. Over 80% is still informal market. So that leaves a lot of opportunity for us to expand.”