Restaurant weeks have become a popular trend in major cities of the world like New York, Paris and London. It is a week during which fine dining restaurants offer a pre-fixed menu at lower prices to attract new customers. 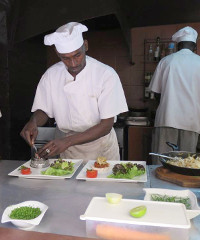 Chefs prepare a meal at the open kitchen of restaurant Le Toukouleur in the heart of Dakar city.

This year, Senegal’s capital Dakar joined the ranks of these cities to offer Dakar Restaurant Week, which took place at the beginning of February. The event was successful and taught co-founders Diarra Bousso and Shruti Dhanda valuable lessons. They share their journey of adapting the restaurant week concept to the developing Senegalese economy.

How it all started

It all started when we wanted to treat ourselves to a fancy meal and we were shocked at some of the prices on the menu. We were eating in a fine dining restaurant in Dakar so, of course, it would be pricey, but the meal was more expensive than many equivalent restaurants in the US or Europe.

This sparked our curiosity to learn more about the industry. Senegal, like many other African countries has no database of information or bureau of statistics on the restaurant industry. We had to do all the groundwork by visiting restaurants, developing our own data tracking system, interviewing restaurant managers, and, in some circumstances, learning through inference.

It was no easy task, but we realised it was important to understand the market before we tried to change it. We wanted to be able to give people the experience of going out and enjoying different types of cuisine the way we had experienced it in the western world. If Restaurant Week was effective at bringing in new customers and offering affordable prices in these bustling cities, why couldn’t we localise these techniques and apply it to Dakar? Thus making eating out more popular and perhaps more affordable.

Market research is difficult but important

Most restaurants in Senegal are owned by the Lebanese community. A lot of their ingredients are imported from abroad, hence the high prices. However, we started to notice that a lot of restaurants also had quite a few dishes incorporating local ingredients and delicacies. For example, one fine dining restaurant offered fresh wood-fired oven pizza at exactly the same price as a fast food restaurant down the street.

We were also surprised that some of the biggest customers at the restaurants were not foreigners, who we expected to have higher disposable income, but wealthy Senegalese.

We realised there was huge information asymmetry in the market and fine dining restaurants could attract many more customers during their low periods through a Restaurant Week promotion. This endeavour would target the growing Senegalese middle class that now has the disposable income to eat out but not necessarily the information or the inclination to experiment.

We also felt there was huge potential since a growing middle class and wealth in an economy often means there is an opportunity to change behavioural patterns and trends. The middle class in Senegal typically only went out to eat on special occasions, such as someone’s birthday or an anniversary. Perhaps, Restaurant Week could help them realise that this was an experience they could enjoy on a more frequent basis and shift their behaviour to become repeat customers.

Armed with our knowledge on the market and ideas on how to improve it, we started meeting restaurant owners as our potential clients by cold calling or visiting the restaurant. Our business model required restaurants to pay a nominal fee to participate – the collective fee would then fund the budget for our marketing campaign.