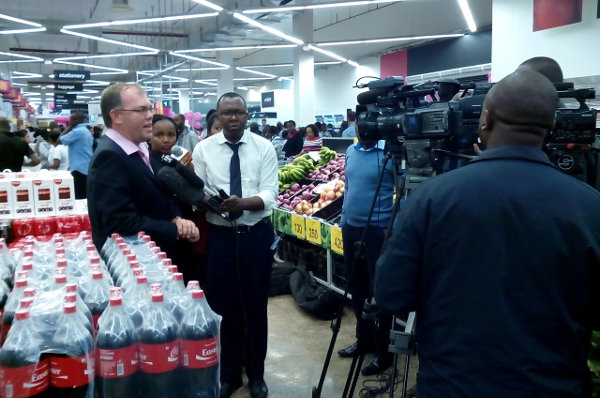 Massmart Africa director Mark Turner speaks to the media inside the Game store at the Garden City Mall. The opening of Game, part of South Africa’s Massmart, marked the retailer’s first entry into the Kenyan market.

South African retailer Massmart (majority owned by US giant Wal-Mart) opened its flagship Game store in Nairobi last month, marking its entry into a market it has been eyeing for years.

But there are already well established local retailers in Kenya that are also expanding aggressively. The four dominant ones are Nakumatt, Tuskys, Uchumi and Naivas. And other foreign players are also entering the market. French retailer Carrefour has already booked space at two new malls, while Botswana’s largest grocer Choppies is planning to acquire 10 stores of mid-tier supermarket chain Ukwala for US$10m.

So what is the plan for Game in Kenya?

Massmart Africa director Mark Turner says Game’s strategy is to offer affordable pricing, and a shopping experience that is convenient, fun and exciting. Game will also honour the repair of products, even after the expiry of a supplier’s warranty, and it will take back any product it stocks if the customer is not satisfied – even if they bought it at a competing retailer.

“We make sure that we are the best priced in the market, but if we are not, the customer has the opportunity to come to us, show us the price that the opposition is selling at, and we will refund the difference of that price plus 10% for their effort.

“This is not a gimmick. We won’t be beaten on price,” says Turner.

Game sells everything from groceries to televisions. It has invested US$7m in its Nairobi store.

Turner notes the Kenyan market and consumer have “fairly unique” characteristics compared to other places in Africa where Game operates. Mobile money payment is well entrenched and consumers are generally tech-savvy.

“In April alone we had 14,000 Kenyans come on to our South African website looking to see what Game is all about. We have had that from no other market,” says Turner.

“We have never come into a market where there has been as much formal retail as here, so the next three months we will really keep our ear to the ground, listen to our customers, understand what they want and make sure we deliver on our promises.”

Massmart has been trying to launch in Kenya for a while. Previous attempts to buy a stake in Naivas failed due to family wrangles among Naivas shareholders.

Turner says the market is attractive because of the “maturing of the retail landscape”. Although there is strong competition, he believes there is enough space for everyone.

“Yes, we are probably going to give each other a hard time on price. [But] I think if we all focus on the consumer and give them what they are looking for, we should all survive.”

Kenya is Game’s third market in East Africa. It is already present in neighbouring Tanzania and Uganda. And whilst those markets are now doing well, Turner says they were also “our slower markets to get to understand the customer”.

“I think our location in Tanzania wasn’t a great location. So it took a while to really entice customers to come through our doors. Certainly we haven’t made that mistake in Kenya. If [you] don’t really get into where the customers are [and] where it is convenient for them to shop, it can prove a big mistake.”

Another lesson Game will be bringing from Tanzania to its Kenyan venture is working with more local suppliers. When it launched in Tanzania, Turner says most of Game’s products were imported. “[People begun] assuming we were more expensive because all they saw were international brands.”

He notes Massmart is considering more sites in Kenya. It will also continue looking for expansion opportunities throughout the region in “underserved markets that need some formal retail”, such as Cameroon. In addition to South Africa and East Africa, Game is already present in Nigeria, Ghana, Namibia, Malawi, Mozambique and Zambia.

“Our expansion to the rest of Africa has actually been very good for our group. Other than one store we closed two years ago in Mauritius, we have got a great offering of stores in Africa.”