Three African presidents stood on a river bank recently, waiting for their boat to come in. It never arrived. This is no metaphor. 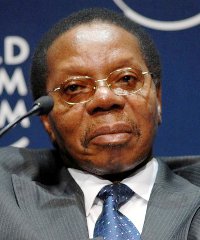 The leaders of Malawi, Zambia and Zimbabwe were gathered at Nsanje on the Shire River in Malawi for the anticipated arrival of a barge, which would have symbolically inaugurated a new inland port at the town. But neighbouring Mozambique spoilt the ceremony by seizing the vessel before it could cross the border on its journey inland from the Indian Ocean.

This disappointment might have hampered an ambitious plan to utilise an inland waterway, but it is unlikely to have torpedoed it. Indeed, it has stimulated renewed debate over the pressing need to improve commercial transportation links in southern Africa – and greater use of the region’s rivers in particular.

For the past five years, regional bodies have spoken about the possibility of rivers such as the Zambezi being used to convey goods and provide new options for countries that are uncompetitive in global trade because of high transport costs.

However, proper feasibility and environmental impact studies have yet to be done.

Malawi’s President Bingu wa Mutharika decided to take matters into his own hands when he commissioned a Portuguese company to develop port infrastructure at Nsanje in southern Malawi.

The test run for the waterway between the Indian Ocean and Nsanje, first along the Zambezi River in Mozambique and then the Shire into Malawi, was undertaken to prove that the route was navigable.

But Mozambican officials impounded the barge shortly after it had set off, saying no permission had been granted for the passage.

Needless to say, Mozambique’s President Armando Guebuza was not at the ceremony in Nsanje. Some say he was not invited; others that he turned down an invitation to join his neighbouring leaders.

Mozambique, in which most of the waterway is located, has insisted an environmental impact study is necessary before any consideration can be given to commercial barging. It maintained that Malawi’s planned inauguration of Nsanje port was tantamount to announcing the Shire-Zambezi waterway was already an international trade route.

There are hitches along the waterway. These include a 20km stretch of marshland on the Shire section and shifting seasonal sandbanks in the Zambezi, which would necessitate constant dredging. Also, the port at Chinde, near the mouth of the Zambezi, cannot dock large vessels, so goods would have to be transported to Beira further down the coast.

Mutharika’s intentions are good, even though some critics dismiss this as a “vanity project”. Transport costs make exports uncompetitive and imports expensive. The Shire-Zambezi route is less than 300kms from Malawi’s commercial capital, Blantyre, compared with the 900km to Beira port, or the 1,200km to Nacala port in northern Mozambique, or the 2,000km to Dar es Salaam port.

Some studies reckon companies in Malawi could reduce export costs by up to 60% by using the waterway.

The Zambezi is also an option for the large-scale coal mining operations being developed in Mozambique’s Tete province, upriver from the confluence of the Shire and Zambezi rivers. Inadequate transport infrastructure in that region is a problem for mines that plan to produce 10 million tonnes of coal in the next two years – and need to get it out of Africa.

Australia’s Riversdale Mining has completed early studies on the viability of the 560km of river from Tete to the Indian Ocean to analyse the viability of large-scale barging to an offshore trans-loading vessel. These studies suggest the route is navigable, although dredging of the Zambezi will be necessary.

There is much talk of the commodities boom enriching Africa but little is said about how these rapidly increasing volumes of goods are going to get off the continent.

Road networks are already taking a pounding by heavy trucks, rail networks are being rehabilitated but most are not competitive, while ports around Africa are congested and inefficient.

Mutharika’s impatience to find a solution is understandable – too many African infrastructure projects are still gathering dust despite the urgent need for new and improved transport routes. But it is foolish to fall out with your neighbours in a quest for glory.