Kenya is one of the more pleasant countries to visit in Africa. It offers a mix of third-world buzz and opportunity along with first-world luxuries such as shopping malls, quality internet access, enough infrastructure to get things done and, more recently, craft beer.

Add to that Nairobi’s near-perfect climate (you know it is good when you’re undecided on whether to pack a business suit or not… it is just too warm for a suit, but tolerable nonetheless). It is not surprising then that so many NGOs and organisations, such as the UN, have a strong presence in Nairobi. It always interests me that there are so many large embassies in Africa: How many high-level political discussions are there between Austria and Kenya, for instance, or Iran and Kenya, or Canada and Kenya? I suppose if, as a Ukrainian, you get altitude sickness while climbing Mount Kenya, it will be comforting to know that the embassy in Nairobi has people who speak your language and can bring you some flowers before you fly out.

The stock market has been under considerable pressure since the beginning of 2015. It is not surprising then that Kenya was screening well on valuation. The Kenyan banks have come under pressure after the president passed a law capping the interest rates that banks can charge. Cellphone giant Safaricom is being investigated for market dominance and both the listed brewer and the listed tobacco businesses have been hurt by higher taxes as government needs revenue. With that in mind, we set off to see if conditions are likely to improve. 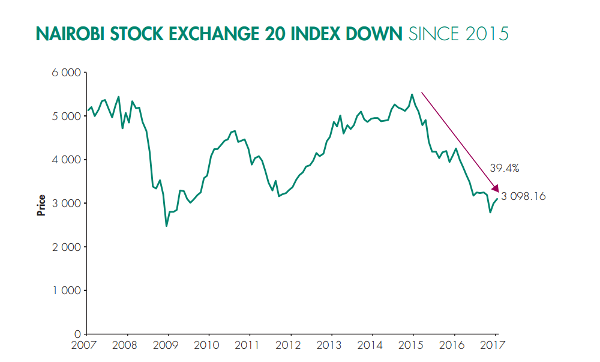 The Kenyan economic situation is worrying – the current account deficit is wide, the fiscal deficit is wide, there is a drought risk (agriculture accounts for 30% of the economy) and there are elections later in the year. In addition, the interest rate caps mean that lending has slowed, which will put the brakes on economic growth. All this means that there is risk to the currency. However, the shilling, which the Kenyan authorities insist is not managed, has been remarkably stable at around 100 KES/USD over the last 18 months. 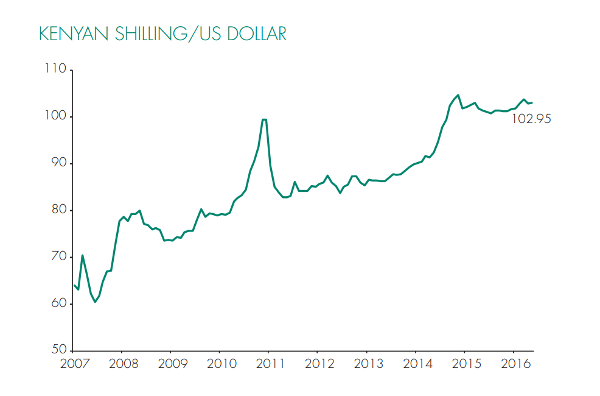 While we expect some currency weakness, we do not expect the weakness to be as severe as in some other African currencies. Firstly, the authorities will defend the currency using their reserves and, secondly, Kenya has a history of increasing interest rates in times when the currency weakens.

Currency aside, we returned from our trip with stronger views on the companies in which we can invest. On balance, we have been adding to our positions in Kenya this year.

We are overweight Safaricom – we expect the dominance report on competition in the Kenyan telecoms sector to (eventually) come out and for Safaricom to go back to being one of the few mobile telecoms that are delivering improving returns. If the report recommends that Safaricom should unbundle or sell M-Pesa, this may even unlock value. M-Pesa, which accounts for around 30% of Safaricom’s revenue, could be valued similarly to PayPal rather than a telecom.

Interestingly, one of the things that have been taking a share of consumer spending is sports betting. Safaricom says that nearly 10% of all M-Pesa transactions now relate to sports betting. It was incredible to see how much advertising is going into this: There are sports betting adverts on billboards and buses, in newspapers and online. In fact, SportPesa, the largest operator, is currently sponsoring English Premier League side Hull City. A report in Business Daily indicated that, on average, SportPesa has one million users daily placing an average bet of Ksh.100 ($1) each.