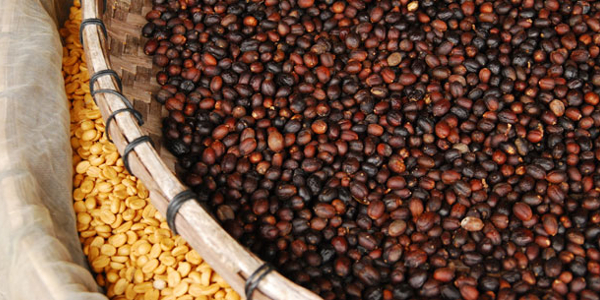 Until recently Vietnam and Uganda shared a similar trajectory in the development of their coffee sectors. Today, Vietnam has emerged as the second-largest coffee producer in the world. In Uganda, poor agricultural inputs and a failing institutional environment have resulted in low yields and slower development of the sector.

In January 2017, world coffee exports already amounted to 9.84 million bags. As one of the most extensively traded agricultural commodities, coffee trade has an interesting structure given the fact that it is exclusively produced in developing and emerging markets. In fact, it’s estimated that 25 million smallholder farmers are responsible for 80% of overall coffee production. But nearly all the 2.25 billion cups of coffee consumed every day are drunk in the developed world.

In the 1980s, Uganda was one of the largest exporters of coffee, responsible for about 2% of the world’s coffee supplies. In 1980 it was producing approximately 2.1 million bags compared to Vietnam’s 77,000 bags. At this time Vietnam hardly exported any of its produce.

Now the tables have turned. Vietnam is one of the world’s top coffee exporters, accounting for over 18% of global coffee exports, while Uganda’s has stagnated to between 2% and 3%.

What’s interesting is that since the 1980s the development of the sectors in both countries followed similar trajectories – from heavy regulation through various policy reforms in the 1990s, to being relatively deregulated today.

But one fundamental difference stands out – productivity. Vietnam has far outperformed Uganda over the past two decades due to its levels of productivity. This is down to the use of agricultural inputs for production, particularly the quality and quantity of fertiliser and machinery.

Coffee has been an important export for Uganda since it was introduced to the country in the 1900s. In 2015 it contributed 17.76% of Uganda’s total value of exports.

The Coffee Marketing Board, established in 1930 to regulate the coffee sector, steadily gained powers until it eventually held a state monopoly over the coffee industry following Uganda’s independence in 1962.

Between independence and the early 1990s the heavily regulated industry faced numerous challenges as a result of poor governance. It was eventually dismantled in the 1980s and 1990s and the sector became fully liberalised.

Today the coffee industry in Uganda is dominated by a large number of smallholder farmers, each with about 0.5 – 2.5 hectares of land. It’s estimated that about 1.7 million households are engaged in coffee production. In 2010 this amounted to a total of around 182,875 hectares under production, compared to 549,100 hectares in Vietnam. Middlemen are needed to collect the small quantities of coffee produced by the multitude of farmers.

The large number of smallholder farmers is not a problem in itself. The challenge is that they produce very low yields per hectare. This coupled with relatively high transportation and processing costs are the main reasons that Uganda’s coffee production has stagnated.

Like Uganda, 85%-90% of the coffee in Vietnam is produced by smallholder farmers, who had 670,000 hectares of agricultural land under coffee production in 2015. Today, Vietnam is the second-largest coffee producer after Brazil, producing 27.5 million bags of coffee in the 2015/2016 planting season. Since 2007, coffee has become the country’s second-largest source of export revenue.

Coffee was first introduced to Vietnam in 1857. It took until 1989 for increased production and regular trade in coffee to take off. Like Uganda, the increase in Vietnamese coffee production also followed the implementation of policies and reforms that liberalised the sector. For example, reform of land administration meant stronger property rights, allowing individual producers to own the titles to their land.

In addition, progressive dismantling of state-owned enterprises broke up the monopoly on agricultural trade.

And Vietnam put in place a number of interventions to address productivity levels. This resulted in Vietnam’s agricultural production being far more capital and input intensive than Uganda’s resulting in higher yields per hectare. For example, in the 2005/2006 planting season, Vietnam had 257 tractors per square kilometre of arable land, compared to Uganda’s nine.

Equally important is fertiliser use. For the years that data is available, it appears that Vietnam was using 300 times more fertiliser than Uganda, per hectare of arable land. Fertiliser use has a significant impact on the yield per hectare.

For its part, Ugandan productivity has been poor. Uganda’s 2008 agricultural census shows that the yield gap from low input use in the coffee sector amounts to 2,734kg/hectare. This means that on average, farmers are producing 396kg/hectare when they could be producing 3,130kg/hectare.

This phenomenon of low input use isn’t confined to Uganda’s coffee sector. It’s a systemic feature of Uganda’s agricultural sector at large. For example, recent research on maize inputs showed major shortfalls in quality. The findings showed that 30% of nutrients were missing from fertiliser, and hybrid seed contained less than 50% of authentic material at retail level.

Although no similar study has been conducted for the Ugandan coffee sector, there are numerous examples that can be used as reference, particularly since the introduction of new higher-yielding varieties of coffee plants. For example, in 1992 the government launched a national coffee replanting programme to replace old coffee trees with newer, higher yielding varieties. The programme was ended in 2004 due to the low survival rate of the plantlets.

There are, of course, other theories and reasons that further compound the differences between the two countries. One is that Vietnam is deemed to have a far more conducive environment for setting up businesses than Uganda. And the Vietnamese government’s assistance to the agricultural sector since the 1990s has been more supportive, helping the coffee sector withstand negative shocks due to weather and price volatility than has been the case in Uganda.

Notwithstanding these differences, the success of Vietnam’s coffee sector hints at the untapped potential that lies in Uganda’s coffee industry. To achieve similar growth, it’s imperative to improve productivity via increased and improved agricultural inputs, fostering a supportive business environment and adopting newer technologies for smallholder farmers.

Astrid RN Haas is a senior country economist working for the International Growth Centre. This article was originally published by The Conversation.