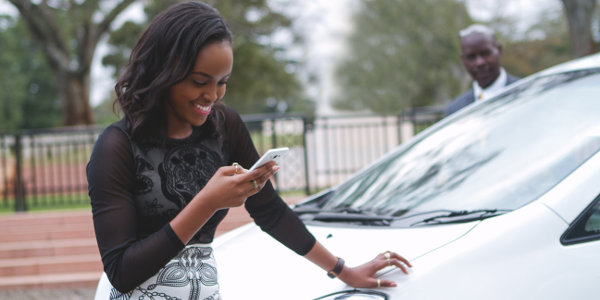 But it has not always been an easy ride for Uber in Africa. One of the lessons it has learned is the importance of adapting to local conditions.

When it launched in Kenya, Uber only offered a bank card payment option, essentially locking out some customers who either didn’t have cards or were unwilling to use them. For most Kenyans, mobile money is often the next option when they cannot use cash, and this too was unavailable on Uber’s platform.

The introduction of a cash payment option about a year ago “transformed the business” and currently the majority of Uber riders in Kenya pay in hard currency.

“[It has been] really crucial to our growth in the Kenyan market,” says Alon Lits, Uber general manger for sub-Saharan Africa.

“Given the success we have seen in Kenya, we have actually rolled out cash in all of our markets,” explains Lits.

“What we do see though is someone might take their first trip on the platform with cash, but over time convert into a card user once they trust the system.”

“I think it really comes down to e-commerce [and] online payments not being commonplace across the continent. So people are [initially] often sceptical to upload payment information to an application.”

But with cash payments comes the challenge of how to collect Uber’s service fee from drivers. In most markets, Lits explains, there is a combination of both cash and card trips, so Uber secures its share from those paid for by card. Drivers can also transfer money owed to Uber via mobile money.

An essential aspect of Uber’s localisation efforts is understanding what works in each city. “It is important we have a local team driving our business,” says Lits. “We are a global company but we have local teams in every one of our markets – which ensures that we have a team that understands the market.”

Uber has gone to great lengths to recruit new users and build loyalty in the region. It has formed partnerships with local players – particularly in the tech industry – and social media personalities to improve its visibility. For instance, when it first launched in Kenya, Uber published a blog featuring fashion personality Sharon Mundia and two technology entrepreneurs Mbugua Njihia and Harry Hare using the app, essentially becoming the country’s first Uber users.

Another challenge in most African cities is the lack of physical addresses. It is a hurdle that delivery companies, emergency services providers and e-commerce firms also complain about.

“We have tested local mapping solutions,” says Lits, noting Uber has worked with Kenyan startup OkHi that is mapping homes in Nairobi.

In Kenya and South Africa, Uber is engaging with local financiers that issue vehicle loans to driver partners and investors. It is also exploring teaming up with local internet cafés, where there will be someone to help drivers sign up with Uber.

Although Uber has faced resistance from traditional taxi drivers in countries such as South Africa and Kenya, Lits says there have generally been less regulatory hurdles in Africa compared with other international markets. He cites the case of Kenya, noting the government made it clear that any form of violence and intimidation of drivers would not be tolerated and six individuals have been charged for alleged attempted murder and malicious damage of a vehicle.

And in Ghana, Uber said earlier this week it had signed a ‘statement of understanding’ with the ministry of transport, kicking off the process of developing a “regulatory framework that allows for ride-sharing technology and regulates its use and adoption”.

Lits notes Uber’s senior bosses in the US see Africa as an important market and intend to launch more features. Later in the year, the company will introduce its Uber Everything in South Africa, a service that will enable drivers to provide food delivery and courier services.