It is getting easier to travel in Africa. So said Johan Badenhorst, South African filmmaker and adventurer, recently. And he should know. Over the past 12 years he has travelled close to 160,000 km on the continent, visiting 32 countries. 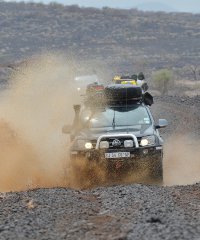 Johan Badenhorst has travelled close to 160,000 km in Africa.

Badenhorst is since 1986 involved in television and in 1994 he established his own production house that produces various television programmes. However, it is his cross-African trips that have been turned into a television series called Voetspore (Afrikaans for “footprints”), that have established him as a household name. These epic 4×4 adventures have become synonymous with beautiful African vistas, treacherous roads, dangerous river-crossings, uncertainty and risk – a perfect recipe for high adventure. It is always six guys in three 4x4s. Each of the men has a specific role to play as part of the television production.

Loraine Stander talked to Badenhorst to try and get a balanced view of what has changed to make Africa “easier”.

What has changed during the last couple of years?

Travelling on the continent poses its own unique problems. Many of them have to do with border crossings and roadblocks. In many countries it is expected of visitors to report to the police once you arrive in a town or city. This created tedious bureaucracy and opens up the possibility of bribes. Many Westerners misuse these opportunities by offering bribes to speed up the process. Hereby a culture of bribery developed in many African countries.

But border crossings have become much easier, some have even improved drastically. Many countries now have computer technology that can scan passports and store photographs of travellers on a database. Carnet de Passage, the international temporary vehicle import and export permits, are being used by more and more countries.

Roadblocks have vanished in many countries. In Angola there used to be a roadblock at the entrance and exit of each town – most have disappeared. In countries where there is internal conflict, like Sudan and Egypt, roadblocks are still common, yet the attitudes of the officers have improved considerably in the past decade.

Ninjas, vigilante groups, are still to be found in Congo Brazzaville and Cameroon. They put up roadblocks and demand a “toll fee”. Quite often they are harmless, should you pay the required fee. We avoid them by travelling through the Ninja infected areas early in the morning (while they are still asleep), or, when they do stop us, we try to befriend them by offering a few cigarettes and perhaps some money if we really need to. We have never experienced the situation as dangerous, but one should be careful if the toll keeper caries an AK 47.

Africa’s roads are undergoing major improvement (courtesy of the Chinese) and travelling gets easier by the day.

What are the areas that must be avoided?

Travel in Africa is never dangerous as long as you avoid the hot spots like Darfur, Niger, northern Uganda and the borders between South Sudan and Sudan and Somalia.

Certain areas of the Maghreb, the southern border of the Sahara, in countries like Mali and Niger and the Western Sahara had been problematic. We managed to travel to Timbuktu a few years ago, but ran into problems as we approached Agadez. The Tuareg Rebellion, which has the tendency to flame up every now and again, makes it difficult to visit this part of Africa. Currently it is a very big no.

Can you name a few favourite places?

There are so many weird and wonderful places that it is almost impossible to single out some.

How do you prepare for your African travels?

Always be prepared, and always be prepared to expect the unexpected. I spend many hours in planning, and lots of money getting everything ready, but even the best preparations will fall short in Africa.

Medical services are very basic. It is mostly restricted to primary health care. It is therefore advisable to get proper medical insurance that will include medical evacuation by aircraft. The basic rule is that if serious medical care is required, the patient must be stabilised and taken to South Africa as soon as possible.

Vehicle break down is a reality. There are however many capable mechanics, all over the continent. These guys are capable to fix their own vehicles, and should therefore be able to do it with yours as well, should it be necessary.

You will have to be patient, think on your feet, and make plans when the best-constructed plans are challenged. However, this makes travelling on the continent so much more rewarding.

Currently ‘Voetspore’ is broadcasted on South Africa’s SABC2. More information can be found on www.voetspore.co.za