During the 2010 FIFA World Cup in South Africa, entrepreneurial activity flourished as South Africans prepared to host an influx of sporting fans and tourists from around the world. One of these entrepreneurs was Jeffrey Mulaudzi, then just 18, who saw an opportunity to provide bicycle tours of Alexandra, one of Johannesburg’s oldest townships. 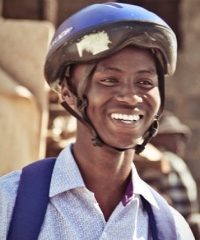 However, unlike many fly-by-night entrepreneurs that catered to the tourism industry in 2010, his business proved sustainable long after the World Cup hype had died down. In fact, Mulaudzi Bicycle Tours is currently ranked as one of the top five activities in Johannesburg by TripAdvisor, and has won him awards.

Turning an idea into reality

Mulaudzi always had an interest in learning foreign languages and in 2010 was learning French (today he is studying Mandarin). When his French tutor asked to be shown around Alexandra, he jumped at the chance.

Mulaudzi was born and raised in Alexandra and is well aware of the negative images associated with the township. He decided that the best way to show his tutor the “real” Alexandra would be on a bicycle ride which allowed better interaction with the community.

And after successfully showing his tutor around, he saw an opportunity in introducing his home to others – not just the usual tourism sites, but the lifestyle and people.

He started simple, making tour brochures and handing them out at hotels, but later found out that they were thrown in the trash. “One day I went to one hotel and dropped my brochures off, and the concierge thanked me and then dropped them in the bin as I went out. Luckily a guest waiting by the concierge saw him doing that and asked for one which was rescued from the bin. He then called me for a tour for the next day,” he told How we made it in Africa.

With the money from his first tour, Mulaudzi started paying hotels to display his brochures and the investment very quickly paid off as tourism boomed in 2010. The money he earned went towards buying more bicycles so he could increase his tour numbers.

Today he has three tour guides and hosts, on average, around three tours a week although this fluctuates depending on the time of year. In addition to tourists, Mulaudzi has also seen a growing number of South Africans take his tours to experience township life.

During the cycling, Mulaudzi introduces his group to various people living within the community who have a chance to chat and tell their stories.

“We make it so that there is communication. So that Alexandra residents can communicate with people from different countries, and visitors can see that they don’t have to be afraid of Alexandra, the place that we come from. We are also people, and I want to show it’s not a place where you will come and be killed or something like that,” he explained.

“I want people to better understand and know what kind of people live in the township as well.”

His tours also include a bit of Alexandra’s history, such as a visit to the infamous hostels erected by the Apartheid government in the 1960s, and the home where Nelson Mandela once lived.

They also visit local businesses and shebeens, which he says brings in business for other entrepreneurs in the community.

Mulaudzi’s entrepreneurial success led him to win the Young Entrepreneur of the Year award in the 2013 South African Turkish Business Awards. He has also been recently named as one of the 12 finalists for The Anzisha Prize, a pan-African competition that recognises entrepreneurs between the ages of 15 and 22 who are using business to bring change to their communities.

Mulaudzi said he has an entrepreneurial heart and while his township tours are his first business, it will not be his last. He is currently looking for partners for his second business, African Public Bicycles, where people can rent bicycles, travel to a destination, and leave them there to be collected by the company.

“At the moment the bicycles are costing around R60 to hire… and if it could be subsidised by a company… which could get advertising on the bicycle, I think it would be a very good thing.”

His plan is to first grow this model in South Africa and eventually extend it across the border.

“Bicycles are the best form of transport to see a country and interact with people. In a car you get stuck in traffic, and if you are walking you can’t cover as much distance. Bicycles make sense… and I think, when you think about traffic, we are going in that direction more and more as a continent.”

It’s all about investing and reinvesting

He added that entrepreneurs should be prepared to fail, but should consider every failure a lesson so that hopefully they never make the mistake again.

“Entrepreneurship is not easy because you always start with losing. I have never read a book that was written by an entrepreneur that says it is easy and you just need to start and you will get money. Never. It’s all about investing and reinvesting… and learning from your mistakes.”