While Africa is a continent of entrepreneurs, success never comes easily. However, being successful is not impossible and everyone has the potential to make it. South African Fred Robertson, executive chairman of Brimstone Investment Corporation, is living proof of this. Brimstone currently employs over 3,000 people in its subsidiaries. 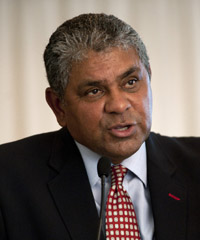 Robertson was born and raised during the country’s apartheid years in Cape Town’s District 6 before the community was forcibly removed and relocated under government orders. After completing his schooling, he briefly embarked on a career in education and then entered into the insurance industry selling door-to-door insurance, a job he says is more difficult than one can even imagine. Hard work, intelligence and an entrepreneurial spirit led him to co-found Brimstone and today he is considered one of South Africa’s top entrepreneurs and highly respected.

Speaking at the launch of the 2013 Sanlam/Business Partners Entrepreneur of the Year competition, Robertson shared his advice to other entrepreneurs on how to be a success. Here are 15 highlights from his presentation.

Be passionate – It sounds like a cliché but that is because it is advice that every great entrepreneur gives. Like Robertson, the large majority of the entrepreneurs interviewed by How we made it in Africa agree that being passionate about what they do has been imperative to their success. It is what motivates them through the long working hours and stressful lifestyle that inevitably comes with running your own business. “You have got to get up every morning and motivate yourself,” explained Robertson.

No great success comes easily – “They say that if you want to become an expert, you can do it a few thousand hours at a time,” said Robertson, comparing entrepreneurs with expert sports players such as Tiger Woods and Serena Williams. “You mustn’t be afraid of hard work. Remember overnight success is never overnight. Hard work and honest, innovative, clever thinking all has to come together for you,” said Robertson. “It takes tough times, often sleepless nights to be successful… it has never been easy.”

But be responsible – “An entrepreneur understands and believes in himself [so much so] that he would put his mother’s money on the table. He would put his children’s money on the table. But then also please be careful, because you have responsibility of that money,” stressed Robertson. “Don’t be like the builder who built my first house. He got the first draw and I saw the next day he [had] a Mercedes… he was seeing to himself first.”

Keep good company – Robertson said that you should surround yourself with individuals that you can learn from. “Go meet with other entrepreneurs that you think are better than you. You could find that they aren’t that much better than you but it’s nice to admire somebody else.”

Don’t give up – “If you fall down, you have got to pick yourself up again,” Robertson added. “In your mind’s eye you must see yourself being successful and collecting that prize.”

Team effort – “I didn’t do it alone,” said Robertson referring to his success at Brimstone. “Go work with people with high energy, who are clever and have integrity.”

Get the right mindset – “Don’t play your game in the dark, go play it in the stadium and see how quickly your game improves. You have the ability to step it up.”

Expand your knowledge – “As entrepreneurs we still need continuous education and training. I read all the time.”

Do the right thing – “There is no right way of doing the wrong thing.”

Contribute to the society you love – Robertson believes that true entrepreneurs should consider themselves as playing a role in society’s development and have a vision greater than their own personal wealth. “We as entrepreneurs can build businesses that can in fact create employment and give dignity to people,” he added, saying that they don’t only employ themselves but others. “Start spreading wealth, start spreading dignity.”

Pay your taxes – “It’s written in the Bible that you have got to pay your taxes,” Robertson said with a laugh. “It has a long history; it’s not a new thing.”

Don’t forget to enjoy the experience – “Enjoy the ride, enjoy the game, follow your gut and enjoy business,” concluded Robertson.