Africa’s wealth of natural resource reserves make it one of the largest producers and exporters of a number of commodities in the world. For example, the continent produces roughly three-quarters of the world’s platinum and over half of the world’s diamonds.

Despite this wealth of resources, very little value is added to these commodities on the continent, with the large majority of its raw materials being exported to the international market.

Edward George, head of soft commodities research at Ecobank, told an audience at the Africa Trade Finance Week in Cape Town this week that despite producing 70% of the world’s cocoa, three-quarters of West Africa’s cocoa crop is exported raw to Europe and Asia where it is processed into cocoa products and chocolate.

“And for cotton – which is the mainstay of francophone West Africa – you have the absurd situation of 70% of cotton being exported raw and sent to China where it is processed into yarn, fabric and textiles, and exported back to West Africa. So you can have West African cotton farmers working on farms wearing T-shirts produced in China with the cotton that they actually grew themselves. The loss of value addition is startling.”

According to Ecobank’s research, 30% of Africa’s import bill in 2012 consisted of machinery, vehicles and electronics, highlighting the reliance the continent has on importing many manufactured products from the rest of the world.

“There is still a heavy dependence on the import of capital goods, industrial materials and manufactured goods,” continued George. “The high portion of vehicles, machinery and electronics reflects the weakness of Africa’s manufacturing sector, in particular in high end capital goods.”

“According to estimates by Bank of America Merrill Lynch, consumer spending in three of Africa’s largest cities – Accra, Lagos and Nairobi – will more than triple from US$6bn in 2012 to $22bn by 2022. That is an additional $16bn of spending every year,” emphasised George. “Most of this increase will come from Nigeria, reflecting the rise of its urban middle class.”

The example of the chocolate bar

To give an idea of how little value is being captured by exporting raw commodities, that are manufactured elsewhere and then imported back into Africa, George used the example of a typical chocolate bar.

“Back in the 1970s when cocoa prices were very high, cocoa accounted for up to 50% of the value of a chocolate bar. By 1980, this had fallen to up to 16%. The most recent estimates put it at between 6% and 7%… The truth is that if you have a 24 segment bar of chocolate, farmers get little more than one chunk of the bar.”

He added that the vast majority of profit from a sale of a chocolate bar is captured by the chocolate manufacturer, estimated at 70%.

“There is only so much value you can get out of a raw cocoa bean. It is when you turn it into something else that the value really is there. So it is my view that – whether it be for oil, for minerals or for soft commodities – Africa should not just focus on producing export volumes and inter-regional trade but it should also focus on extracting more value from its commodities before they leave port,” concluded George. 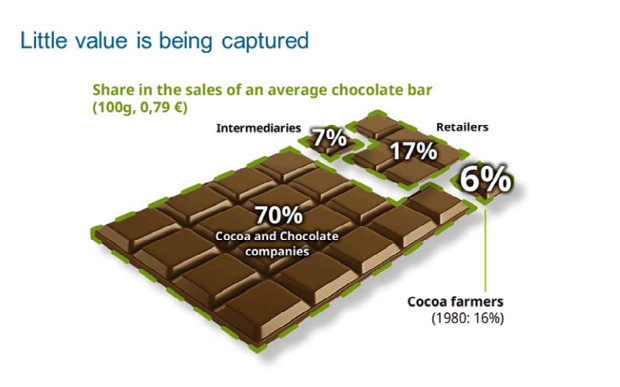