In January this year, Tanzanian solar solutions company Rex Energy launched a solar powered charger for mobile phones to address the needs of people living off the grid. 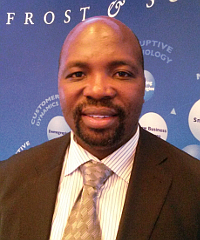 Rex Energy was recently recognised at Frost & Sullivan’s Africa Best Practices Awards Banquet for its solar innovations to address this energy gap. On the sidelines of the event, Kibhisa told How we made it in Africa the company is developing payment options, through services like M-Pesa, to make the technology more affordable for rural communities.

Depending on the package, the solar chargers can cost between US$15 and $50, but he believes the way forward is to allow flexible payment plans. “We know capital is always a challenge for rural villages, but if we give them renting charges where a person can pay a few cents of a dollar a day, or even say $1 a week, then they can afford it because we spread the cost over a length of time.”

The system is portable and can also charge laptops and other appliances in remote areas not linked to the national grid.

Kibhisa founded Rex Energy in 2000, and the company has developed a variety of solar powered products, such as lighting, fridges, batteries and water heaters to address the needs of communities and organisations predominately in rural areas where people have to rely on kerosene power.

“We have a number of solutions, including for fishermen who can use a solar powered system instead of kerosene lanterns. We have innovated a solar lantern that even attracts fishes to the nets… which besides cutting fuel costs also helps them catch more fish, and at the same time helps reduce carbon emissions.”

The company also has a mini-grid, pay-as-you go energy solution where a solar system is installed in a community. Households can pre-set a time to access electricity and thus only pay for the electricity they use.

“We actually learnt about this from what is happening in Bangladesh. There they have quite good models and we are working with them to see how we can bring it to Africa, in particular Tanzania. Instead of people having to buy big solar panels, they only pay for electricity… at a very affordable cost.”

Rex Energy is also in discussions with telecommunication companies to provide power to their stations in remote areas.

Kibhisa noted that African economies have the potential to become global players, but development is limited by the lack of power access, and innovation is essential to ensure continued economic growth. “Without reliable and affordable power, we will never be able to develop our economies.”