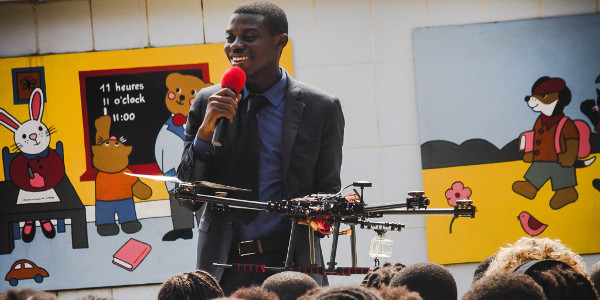 The news wasn’t big enough to excite international media, but it was an exciting development this year in Cameroon when Will&Brothers, a local engineering and consulting company, unveiled the first-ever drone made in Cameroon.

“It’s the pride of the country,” exclaimed Ms Minette Libom Li Likeng, the country’s minister of telecommunications and postal services, who attended the unveiling.

Last year, Forbes magazine named Will&Brothers founder William Elong, 25, one of the most promising Africans under 30.

Elong, who describes himself as a “big dreamer and overachiever”, at 20 years was the youngest-ever graduate of the Economic Warfare School in Paris. He is better known in his country for his Drone Africa venture, a commercial imagery service used by the tourism and agricultural industries in Cameroon.

The company provides services to the local tourism industry, allowing it to access a “different vision of the same reality” – aerial images of points of interest.

The company also offers mapping services to farmers and others, making it easier for them to pinpoint the exact dimensions of their arable lands.

“In Cameroon, people have lands but often don’t know the borders of their fields. Our service helps determine that,” he says. In addition, farmers can use their services in field surveys and targeted in-field crop management.

Since its founding three years ago, when it had four employees and 12 drones, the company has been growing at a good pace: it now has 12 employees, half of whom work in the Douala headquarters, while the rest operate from Germany, France and Côte d’Ivoire.

Following the unveiling of his locally made drones, Elong is looking at expanding into other countries in Africa, Asia and Europe, and is in the process of raising US$2m for that purpose.

It will not be the first time that Will&Brothers has relied on external and publicly subscribed financing for the drone initiative. Three years ago, the company managed to raise some $200,000 to advance the drone manufacturing project.

“It is not just about the hardware,” Elong said. “It is also about software, about coding.” While he is eager to locally manufacture cheap drones, the real challenge is to provide tailor-made solutions to socioeconomic development challenges, he said.

So enters Cyclops, Elong’s next quest, which aims to explore artificial intelligence and with which he wants to equip drones with the ability to “detect people, objects and vehicles and to identify different types of animals at specific sites”.

“Artificial intelligence is the future of humanity,” he says. “I wish more people would take an interest in technology.”

This article was originally published by African Renewal.