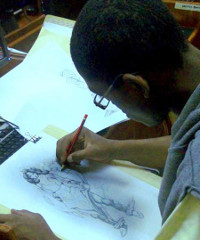 Cameroonian Olivier Madiba, 29, is the entrepreneur behind Kiro’o Games, the first Central African game studio, which he officially set up in 2012. He wanted to be a video game developer since he was just 14 and his studio’s focus is on producing games inspired by the challenges, history and culture of Africans.

In 2003 he started working on Aurion: Legacy of the Kori-Odan, a fantasy game based on African traditions and myths, which he has since been adapting and enhancing.

We didn’t actually know there was an “equity crowd-funding” option when we designed our own fundraising attempts. So we imagined it, with the ambition of recreating our own “simple” Wall Street for our venture.

2. What risks does your business face?

We face piracy and the potential that the game (Aurion) may not be able to sell itself if the public doesn’t like it. We had other risks at the very beginning based on internal problems (such as bad management), but I think we have passed that stage now.

For us it is the fan base, and the fact that the target market identifies themselves in the product. It is important that everyone in our target sphere references our product as something promising. The most successful form of marketing is really word of mouth.

We also quickly realised the value of having a good relationship with the press. Having a network of journalists in your sector is important, and helps generate hype around your product’s release.

That is a difficult question, but I think it was when we released our Aurion game trailer. That was an exciting moment because it showed the realisation of an idea that we had in our heads since the beginning. Even inside the studio everyone had only seen the game run partially. The trailer was the ‘merging moment’ of all we have been working on for the last year. It is almost like when you design a rocket, and you can only test it when everyone sends you the parts for the launch.

We also felt some stress over the public’s reaction, and were very excited when everyone liked it. That’s the kind of moment where you say: “Yeah, we did it!”.

5. Your biggest mistake, and what have you learnt from it?

My biggest mistake was to recruit technical people in the beginning without insisting they had an ambitious mindset. So we had a lot of turnover on some positions in the beginning and thus wasted time on training every new recruit. That’s where I learnt the importance of hiring people with technical skills, but who also have a personal vision that matches mine.