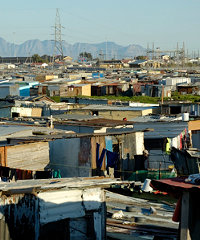 Entrepreneurs in the Cape Town township of Khayelitsha are finding it difficult to expand their businesses.

So says a fact sheet produced by Reciprocity for the University of Stellenbosch Business School’s BOP Learning Lab.

An earlier survey by Reciprocity and PlaNet Finance revealed that the majority of informal entrepreneurs in Cape Town townships are looking to grow their businesses, but are unable to do so because the type of credit, insurance, training and financial services available in the formal market are not adapted to their needs.

Coetzer says that the private sector needs to seize the opportunities available to fill the gaps in the low-income market.

Khayelitsha, which means “new home” in isiXhosa, is one of South Africa’s largest townships. Its official population is about 450,000, although it is estimated that the actual figure is probably double that. The township suffers from poverty, inadequate housing, high unemployment and crime.

According to official statistics, the total disposable income for the Cape Town metro was R135.5 billion in 2008. Khayelitsha’s share of that income was about R9 billion or 7%. This translates into an average annual disposable income of about R20,000 per person, which is just more than half the overall average of R39,115 for Cape Town. “The real figure is probably substantially lower if one takes into account that official figures are likely to underestimate Khayelitsha’s population considerably,” says Coetzer.

Data compiled by the City of Cape Town, reveals that a typical Khayelitsha household spends around R8,200 per year on food, beverages and tobacco, less than the R10,880 average for Cape Town as a whole.

Interestingly, Khayelitsha’s annual expenditure on clothing and footwear, is on par with the Cape Town average of R1,772 per person.

Khayelitsha residents, however, spend far less on rent. Annual rental expenses are an average of R1,800 per person, less than one third of the overall Cape Town average of R5,977.

Coetzer, however, notes that the data might be flawed as it is based on point of sales, rather than the place of residence of buyers. Khayelitsha has few shopping facilities, and many residents do at least part of their monthly shopping elsewhere.

He also highlights the fact that Khayelitsha is not a uniform market as there are areas within the township with middle-class living standards.

“Khayelitsha could be seen as the perfect laboratory in which to pilot and test innovative business models. Its population is a cross section of South Africa’s urban underbelly, from job-seeking newcomers freshly arrived from depressed rural areas, to established first, second or third-generation Capetonians slowly climbing the social ladder,” says Coetzer.