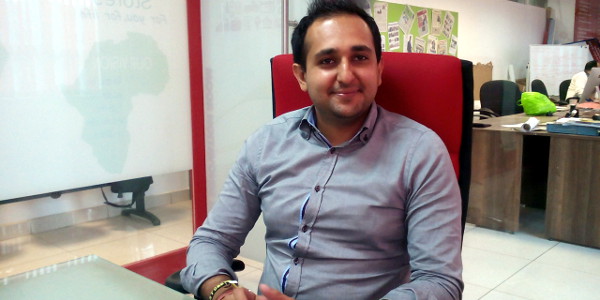 Kenya’s supermarket business is dominated by four big retailers – namely Nakumatt, Tuskys, Naivas and Uchumi. Besides the publicly-traded Uchumi, the other three are family-owned chains that started as small shops.

But in addition to these, there are other emerging grocers beginning to pose some competition. Most of these up-and-coming retailers have small operations, selling mostly fast-moving consumer goods but offering more variety and convenience compared with informal shops and kiosks.

One of these companies is Society Stores, headquartered in the town of Thika (situated about 45km outside the capital Nairobi).

“I want to be the Walmart of Africa,” says Trushar Khetia, the founder and CEO of Society Stores.

The company runs four outlets and is set to launch two more later this year. Khetia opened his first Society Stores shop in November 2014, after acquiring an established supermarket in Thika. He then bought two more in the agricultural towns of Meru and Maua in June and October 2015. Later, in December, when the loss-making Uchumi gave up a location it was set to open in the town of Naivasha, Society Stores jumped on the opportunity and launched its largest shop so far.

Khetia’s family is also involved in the retail and wholesale industries. His grandfather – a Hindu priest who emigrated from India to Kenya shortly after the country gained independence – founded a small retail shop in 1982 that has morphed into Khetia Supermarkets. Today the company is a big player in the retail business in western Kenya.

Khetia is deliberate in his choice of location and the size of his shops. He has no ambitions of owning a huge outlet in a modern shopping mall. The idea is to keep the shops relatively small and offer slightly more affordable prices compared with the bigger retailers. He says his target is “the middle mass market”.

Economists might point at aspirational shoppers and an emerging middle class in big cities like Nairobi and Mombasa, but for Khetia’s business, “up-country” is where the opportunity lies.

“We decided to pick these nice agricultural, cash-heavy towns… places that had been neglected. Our store in Maua is the best performing outlet, even though it is the smallest. It is the most profitable by size and this is partly because of the miraa business,” says Khetia. (Miraa, also known as khat, is a plant that produces leaves which are consumed as a stimulant. Maua is a major khat producing centre.)

“The cost of labour is cheaper up-country than in Nairobi. The rent is less, and you still find people with disposable incomes.”

“Many of us medium retailers don’t open shops in gigantic malls. For us it is about taking the shops to where people live as opposed to making people come to us. In Naivasha, we have parking spots for about 40 cars at our outlet, which is in the middle of town. But it is a unique example. In our other stores – in Thika, Meru and Maua – you would only find about four parking spots. Most people just walk from home to our stores.”

Many emerging retailers appear to be set on building a footprint in smaller towns, before venturing into Nairobi where the market is controlled by the big four chains. Maathai Supermarket, for example, which built its business in farming areas, entered the Nairobi market with the opening of its first store in the CBD at the end of 2014. At the time it operated five outlets in the towns of Thika, Ruiru, Murang’a, Nyeri and Karatina. Another retailer, Eastmatt Supermarkets, started operations in Mau Narok in the 1990s as Eastleigh Mattresses before venturing into Nairobi.

Society Stores will be opening its first outlet in the capital later this year, in the suburb of Kayole.

Khetia says he has no interest in selling to the competition, if anything he would like to continue growing his number of outlets.

But not every emerging retailer is flying high, says Khetia. After all, even one of the big four – Uchumi – has closed down, reopened and come close to another collapse, all in just one decade.

“It is a tough business. If you pick the wrong location, you are 80% in trouble,” he warns.

“Everyone thinks supermarkets must be making a lot of money. But they don’t realise the work that goes on in the back-end. We are dealing with 40,000 product lines, 300 suppliers, 350 staff [and] 10,000 customers.

“Do you think that is easy to deal with? A lot of people have opened outlets in random places and failed.”