This week marks the eighth anniversary of the collapse of investment bank Lehman Brothers. It was the largest bankruptcy on record – the bank had US$690bn in assets – and turned the one-year-old credit crunch into a full-blown global financial crisis.

With credit markets seizing up, especially interbank lending, the spill-over to the already declining US real economy was severe. Although the crisis was triggered in America, it spread worldwide, putting over-leveraged banking systems under tremendous pressure. Global flows of credit evaporated and the world economy went into a deep recession.

September 2008 was the low point not only for equity markets. As economies worsened, companies started reporting losses and the market continued to fall until March 2009. Many companies embarked on painful restructuring processes, worsening job losses. But the relentless cost-cutting also meant that they were able to increase profitability once the economy reached stability (which was partly achieved through massive bailouts to get the credit markets unfrozen). As soon as the equity market got a sniff of this, it recovered very quickly, even though the macro environment was very uncertain.

The effects of that financial crisis have lingered. Despite record-low interest rates, households are reluctant to borrow and businesses are not investing much (often preferring to use cash to buy back shares – great for shareholders, but not for economic growth).

The defining feature of the post-crisis era has probably been persistently low interest rates. The safe-haven US 10-year bond yields plunged by 40 basis points on the day of the Lehman Brothers collapse and kept sliding to end 2008 at 2%. Today, however, it is even lower at 1.6% although the economy has improved substantially.

Just when everyone thought that rates could not fall any further, they did, with around $13tr in Europe and Japan trading at negative yields. Low rates in part reflect low inflation and expected inflation. Nearly all the major central banks have failed to meet their respective inflation targets – apart from a brief period in 2010 when the oil price surged – with inflation undershooting. Low yields are also partly because of central bank interventions – the European Central Bank’s purchases of bonds recently passed the €1tr ($1.12tr) mark and it is struggling to find enough bonds to buy. Its quantitative-easing programme will continue running until March next year at least, adding another €500bn ($561.17bn).

But in the US, where the central bank has stopped buying bonds and has raised its short-term interest rate, bond yields have also fallen further. The demand for bonds is therefore also coming from investors. But while some investors are chasing the perceived safety of developed market bonds – despite the negligible yields – others are forced by regulations to hold them. However, there is another category of investors who will look elsewhere for returns, particularly in high-yielding emerging markets like South Africa.

Last week’s market sell-off was driven by the fear that monetary policy is reaching its limits. The world now needs fiscal stimulus. And yet another defining feature of the past eight years has been politicians’ obsession with balancing budgets, cutting deficits and reducing public debt. This obsession was not a feature of the pre-crisis era, but the final act of a three-decade-long explosion in private borrowing.

South Africa’s economy recovered relatively quickly from the global crisis and it also had a shallower contraction than the US and Europe, for instance. By the second quarter of this year, South Africa’s real gross domestic product is 15% larger than it was at the beginning of 2008 – while the US economy grew by only 11% and the Eurozone by a mere 3%. However, the last two years have seen South Africa’s economy hit by a number of shocks (and own goals) that saw a dramatic decline in growth rates, culminating in the first quarter’s 1.2% decline. 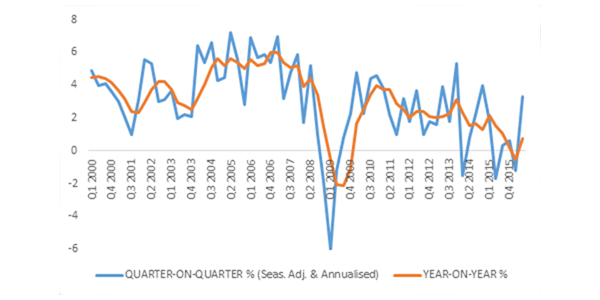 These shocks included a dramatic decline in commodity prices, load-shedding, a five-month-long strike in the platinum sector, the worst drought in decades, higher interest rates and a collapse in the value of the rand. While an economy always faces shocks, it was unusual to be hit by so many at once. Fortunately, the impact of these shocks doesn’t last forever, and the second quarter saw better-than-expected GDP growth of 3.3% quarter-on-quarter (and 0.6% year-on-year).

The stronger second quarter was driven by recoveries in the mining and manufacturing sectors, while exports have bounced. South Africa posted a R33bn ($2.28bn) (seasonally-adjusted and annualised) trade surplus in the second quarter, compared to a R47bn ($3.24bn) deficit in the first quarter.

After a sharp decline in the first quarter, household consumption expenditure grew modestly in the second quarter. The compensation of employees (the wage bill) for the economy as a whole is still growing by 8% on an annual basis, which means that consumers in aggregate are seeing real incomes increase (with inflation around 6%). With inflation expected to decline and interest rates probably peaking, there is scope for household spending to continue growing moderately.

The second quarter GDP bounce is obviously welcome, as it means growth forecasts will be adjusted upwards for the first time in many years (typically a sign of a turning point). It also means that there will be no technical recession (defined as two consecutive negative quarters, although it’s not a very useful measure). However, we are already well into the third quarter.

The July mining production numbers showed a 5% year-on-year decline, but mining production has been volatile and moved sideways for the past few years. Overall, output levels are still low and have reasonable scope to improve.

Electricity generation increased by 2% year-on-year in July, consistent with more activity in the energy-intensive mining and manufacturing sectors.

What we really need is an uplift in confidence, with consumer and business sentiment at levels typically seen in a recession. Fortunately, the BER’s latest business confidence survey improved in the third quarter, after six consecutive quarterly declines. It is in net negative territory, but at least not declining any further. All five measured sectors showed an improvement, which the BER argues is also typically a sign of a turning point. The survey was largely completed after the feel-good local government elections and before the recent uncertainty over the future of the finance minister. Unfortunately, political uncertainty could weigh on sentiment, even as conditions on the ground appear to be improving gradually. 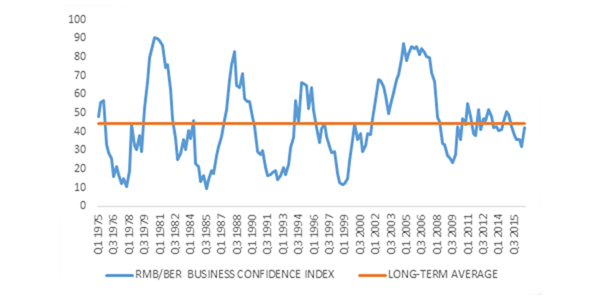 Looking ahead, the key factors that will determine the extent of the recovery are the direction of the rand, with its important influence on inflation, interest rates and general sentiment. The October mini-budget will also be an important milestone (irrespective of who delivers it). Firstly, it will give an idea of whether South Africa can avoid a downgrade later this year, and secondly because if there are sharp cuts to the deficit through tax hikes or spending reduction, it might just be another shock to the economy.