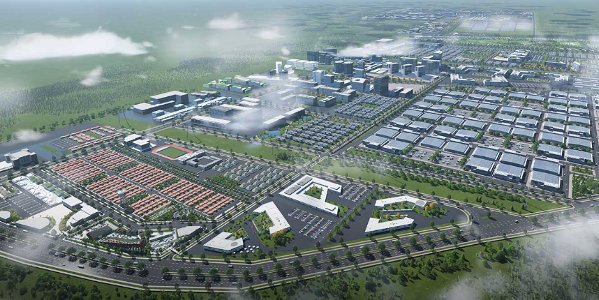 An artist’s impression of the proposed Star City development.

On the south-western tip of Singapore island stand two desalination plants that covert sea water into drinking water suitable for human consumption. Together they cater for about 25% of the country’s water needs. Hyflux, the Singaporean company that owns the plants, has built similar facilities across the world, including two in Algeria. In addition to water solutions, it is also involved in power generation and commercial property development.

Hyflux now wants to use its know-how to develop a new town, called Star City, in Tanzania. The project is situated on 33 km2 of land (roughly 5% the size of Singapore) outside the town of Morogoro, 170 km west of the commercial hub Dar es Salaam. Star City is a joint venture between Hyflux and a local Tanzanian company.

Singapore, one of the world’s most densely-populated countries, sees itself as an expert in urban master planning, with companies such as Hyflux and Surbana Jurong exporting this expertise to Africa.

When completed, Star City is expected to feature an industrial/logistics park; a residential area housing 140,000 people, as well as a university town with educational facilities. A hotel, golf course and theme parks are aimed at attracting tourists. The development will also have its own power plant and water treatment facilities.

Morogoro might seem like a remote area for such a development, but according Hyflux it is a strategic location for products imported or exported through the congested port at Dar es Salaam. The promoters want to attract industrial activities such as processing and packaging of agricultural products.

“We aim to build an industrial-logistics hub, leveraging on Morogoro as traditionally a logistics area. We will encourage people to invest there, to do processing – food processing [and] light industrial processing,” says Peter Wu, senior managing director for special strategic projects at Hyflux.

He says Star City has been designated as a special economic zone, and companies located there would be able to take advantage of tax benefits. “We are expecting a lot of people would be moving into this industrial area to enjoy the preferential treatment… And the government is committed to have customs built in this place, so that [companies] don’t have to go through the seaport customs, they can take the container directly to this dry port to do the customs clearance.”

Wu told How we made it in Africa there could potentially also be opportunities for outside investors, such as shopping mall developers, to participate in the project. However, the immediate focus is to complete the primary infrastructure. “The road has to be there, water has to be available, power has to be available, there has to be waste water treatment.”

Clearance of land has already started, but Wu says the project will be built progressively in a way that is “commercially viable”. The initial phase will comprise 500 houses together with industrial and commercial facilities.