At the launch of the inaugural WIE Africa (which stands for Women, Inspiration and Enterprise) symposium in Cape Town last week, a number of respected African businesswomen and leaders shared their thoughts on the role women should be playing in Africa’s future. Here is what they had to say. 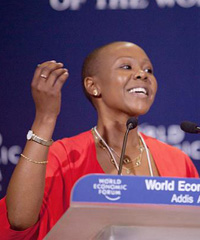 “I see women as being central players. Part of my concern just in my experience in public service is that so many women are running the economy or are the economic drivers in our countries [but don’t receive the benefits of this]… and unless we are able to figure out how to switch that balance then we are not going to have significant growth and that is critical. For example in agriculture, most farmers in agriculture are women.” – Elsie Kanza, head of Africa, World Economic Forum

“There are a lot of responsibilities that women have that men don’t have. The future of Africa’s growth is in the hands of women to a large extent. We have to step up so to my mind we need to take responsibility. We need to ask for a seat at the table. We need to drive some of these initiatives we have… this isn’t about men or women any more. It’s about women chipping in and moving forward and accepting that we won’t be invited to have a seat at the table.” – Yvonne Ike, CEO of West Africa, Renaissance Capital

“Women around the globe are not yet sitting where the decisions are made… One of the challenges of the next 20 years, is that women have to acknowledge that their strengths come from that interconnectedness which they feel – whether you are illiterate, whether you are a doctor with a PhD, whether you live in New York or you live in New Delhi or wherever you are – you are facing the same challenges. And we are going to conquer that space to make decisions about our life, about the life of our families, our communities, our nations, of the world in which we live in. We will only be able to do that if we work together and if we interconnect… but more importantly for me, it’s not a question of the numbers of having women sitting on boards, sitting in parliament… the numbers are important, but more importantly is the transformative leadership which women have to bring to those institutions to do things differently, to lead with a sense of responsibility and a sense of accountability… It’s the kind of leadership in which you have people’s interests at the centre of your activities.”

“Particularly those that are very successful, make it a point for yourself to say at least ‘I have to bring 10 women to the level where I am over 10 years’… and when I say 10 years it means one per year. Set [this goal] for yourself according to your ability and capacity, but you have to define that. We need to go for what I call ‘multiplying faces, amplifying voices’, which means you make sure that hundreds of other faces are at the centre stage and you play a role to bring them up.” – Graça Machel, political activist, renowned advocate for women’s and children’s rights, and Nelson Mandela’s wife

“Men have access because of networks and partnerships. Half the time they will be fighting but they would have got the opportunity. So there are other issues that we have to look at as to why women do not have access; it’s because they are not part of a boy’s club network…”

“It’s a question of a strategy for me…. looking at where we are, the context in which we try to enter the economic system, we have to have clear strategies as to how we partner and connect. Sometimes for women who have made it you will find that for any one sector, in mining for instance, you know maybe five women who are in mining… Those women have made an entrance but they don’t have a strategy as to how do we become a transformation hub and aggressively bring in other women.” – Hlengiwe Mkhize, deputy minister of economic development, South Africa

“Change doesn’t happen without you fighting for it… there is only one way [women] are going to change [their situation] and that is through hard work. People want things to come to them without putting in the hours. You really have to put in the hours. You have to read, you have to understand what you are doing and do the right thing – that’s the only way that we are going to move forward… As women I honestly believe that the biggest wars have been won, but the challenges remain and I really think it’s for us now to just go and work.” – Mojanku Gumbi, advocate, political strategist and former legal advisor to former South African president Thabo Mbeki

“My number one advice to these women is that they must have workshops; they must work together, and have motivational talks as woman. And as a successful person, it’s not final. I’m still in a race… So for them, they must just have courage, to push to go open the door that you can’t open. And for them to be successful, they must not be afraid to ask ‘how do we do this?’ The most important thing for a woman is to have skills.” – Rachel Tladi, founder and owner, Uvuko Civils