In October 2011, a 66-year old wheelchair-bound French woman was kidnapped from her beach house on the Kenyan coast by Somali gangsters and taken to mainland Somalia. In a matter of hours, tourism at Lamu Island where the kidnapping took place was shattered as news of the incident spread. 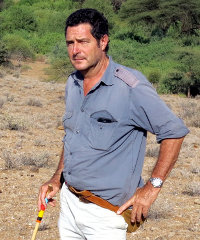 Fuzz Dyer, who runs Manda Bay, a lodge at the island, watched as the tourists packed their bags and left.

“For that month of October we probably had 68% occupancy. It is usually a busy month. That went from 68% to zero that day. Everybody left and there was not a single guest that came in. It was very difficult,” says Dyer.

Dyer says the kidnapping had an adverse affect on his business.

“That actually stopped tourism completely in Lamu. Pretty much zero business for us. At full capacity your overheads are at US$2,500 a day. How long can you stay open burning $2,500 a day? We tried to reduce the cost a little bit and stayed on for the first four months.”

Eventually, after further cuts, Manda Bay had to close down for five months. The lodge reopened in October 2012 and broke even in the middle of this year.

“It has pretty much been two full years of selling assets, offloading stuff and basically pouring money into the sand,” says Dyer. “Tourism is fickle. But it is still the biggest contributor to the GDP in this country at 12% now. If you take that away, the country will suffer.”

Dyer is optimistic that tourism on the island will soon begin booming thanks to the combination of oil and gas exploration at the Kenyan coast, the construction of a $16bn port in Lamu and the recovery of US and European economies.

“We just had a lot of Australians coming through because the Australian economy is really strong. The US is coming back into line. The UK market is slow, but we are getting reasonable business from other parts like Switzerland and France. Kenya is becoming a trendy place to be again.”

After 20 years working in wildlife conservancy, Dyer and his business partner Andy Roberts bought a ”rusty” lodge in 2003. They pumped money into rebuilding it into Manda Bay, which, at full capacity, hosts 50 guests.

“We were very fortunate: 2004 up to 2007 were brilliant years for tourism, probably the best years. We were running at really high occupancies for that market – between 65% and 70%. It was pretty good.”

In 2008, violence broke out in Kenya after the disputed presidential election.

“That coincided with the global crash. We would have groups, young bankers bringing all their friends and families and taking over the whole place. That all disappeared completely with that global crash. It took a good long time to recover.”

Although he has faced tough times in business, Dyer remains positive.

“You should never be defeated by one blip,” he says. “There is nothing that has been really scary. You know, a lot in business is attitude. Obviously everything is a risk, but it should be a calculated risk.”

Dyer would like to see better management and marketing of tourism products in Kenya, as well as stronger commitment in maintaining security.

“Security is major. A single incident can be so detrimental.”

The Kenyan entrepreneur runs a number of other businesses, including an air charter bus company, Air Lamu. Dyer and his partner Roberts are both pilots and own an airplane which they use to stock up on supplies for the lodge.

“It just made sense. Manda and Lamu are a long way from anywhere basically. It is very expensive doing all your resupplies and running a business there,” says Dyer. ”It means that every time I take guests from Lamu to Nairobi I will have an empty plane that will now be full of my resupplies. So, it was just a sensible decision.”

Oil and gas exploration at the island and surrounding areas has increased demand for Air Lamu’s private charter flights. The company is geared towards expansion and is set to acquire more airplanes next year.

Dyer is keen to diversify his investments beyond tourism to cushion against the uncertainty in the industry.

“I am definitely going to diversify a little bit more. [We are] diversifying out of tourism so that we don’t have all our eggs in one basket. But we will still be very active in tourism.”

One of the lessons he has learnt in business in the last 12 years is to always use experts in structuring and analysing a business before pouring money in it. Choosing the right business partners, he says, is also important.

“I am very lucky with my main partner. Other partnerships have been much more complicated. If you are going it alone that is great, but I prefer to work with a partner in business. It is good to have another sounding board and share ideas.”

Dyer expressed optimism about the prospects across Africa, adding that the region has become much more attractive to investors in recent years.

He advises other entrepreneurs to have confidence in themselves and their ideas.

“You have got to have confidence in what you are going into and confidence that you have the ability to drive that business all the way. That is absolutely paramount.”