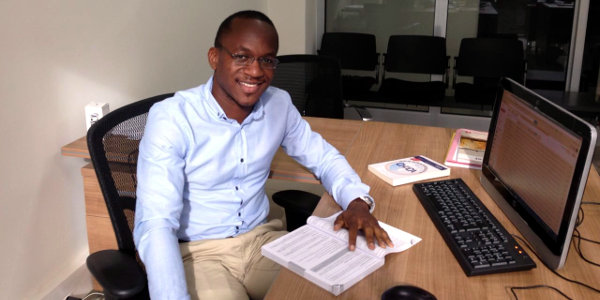 José A. Momo Chema (also known as César) lost his job last year, when the oil and gas company he worked for shut down its operations in Luba, a town on Equatorial Guinea’s Bioko Island. The former Spanish colony struck oil in the mid-1990s and has since become dependent on crude exports. But the downturn in the commodity’s price – falling from over US$100 a barrel in 2014 to below $30 this year – has forced some companies to either downsize or cease operations completely.

Momo describes his retrenchment as a blessing in disguise. He stumbled into the industry after receiving a scholarship to study mining engineering in Spain, but had always wanted to venture into entrepreneurship. The challenge was giving up a high-paying job for the unknown, unpredictable world of an entrepreneur.

His retrenchment was the final push he needed.

“At that moment I told myself, ‘Okay, this is it. Now it’s your turn to do something for you. You have the time and have saved some money – now is your chance.’”

He set up GloBISCO in the capital, Malabo. While he did not have one distinct business idea in mind at the time, Momo wanted the company to cater for the many opportunities he saw in the market.

“There is a lot of opportunity here,” he says. “You just need to look around you.”

His first idea hit him while taking his friend to the clinic. He noticed that the vending machine in the waiting room was not working.

“And that caught my attention. Vending machines are not common here and I thought somewhere along the line someone is going to start selling and servicing them in this market – maybe I could do it first. So I started doing some research and found a Spanish company which manufacturers these machines,” he recalls.

“And so I flew to Spain and spent a week in the factory to learn everything about how they are manufactured and configured, and how to troubleshoot or fix it if there is a part that needs to be replaced. I basically learned everything about these machines.”

Momo then returned to Malabo to start supplying and servicing vending machines in Equatorial Guinea, as well as surrounding countries. He also bought two machines, so that he could let potential customers test them out first.

“People here are very sceptical about giving lots of money to someone new in the market. They need to know that if they give you the money, you won’t run away with it. So I bought two vending machines so that they could see that what I am doing is real, and so that I could build trust with them.”

Momo has sold a handful of machines to date – the economic slump his country is facing has posed challenges.

“People are not that willing to invest at that moment. But I’m working on it and the business is still going,” he says.

An opportunity in mangoes

Momo has also ventured into mango farming, an idea he actually got before founding his company.

“It all began when I was watching the news on TV and heard how these big Arabic companies were visiting the country to look at opportunities for manufacturing [tropical] fruit juice. I thought about this when I later went to the shops to buy some mangoes and noticed how high the price was. I asked the shopkeeper why this was and she said it was because there weren’t enough mangoes.”

Armed with this information, Momo found a partner and they ventured into farming a variety of mangoes, chosen because they would grow in different seasons. The aim is to export their first harvest to foreign manufacturers in the Middle East.”

The budding entrepreneur’s next venture was in ICT training – an opportunity he learned about through his brother-in-law, who had a background in the industry. Together they opened a training centre to provide skills to young people who wanted to become ICT professionals.

“There are other training centres, but they only teach things like Microsoft Word and Excel. There are a lot of people here who need to get training beyond this. So we decided to teach things like how to connect different computers and create network infrastructure – stuff like that,” he continues.

“It has been going very well so far and we have lots of enrolments. We have also partnered with an internet company who provides professionals to teach courses, and are talking to an [international organisation] about setting up a larger centre.”

Momo wants to start producing frozen plantain. The fruit (a starchy, less-sweet variety of banana) forms the basis of many meals in Equatorial Guinea, and is often chopped up and fried into a savoury dish similar to French fries.

He realised that there was a market for ready-to-cook, chopped-up plantain to be sold packaged and frozen, so that consumers could save time when cooking. And his business plan recently won first prize and 12.5m CFA (over US$21,000) in Total’s ‘Startupper of the Year’ competition. Most of this money has gone towards purchasing the industrial machines needed to manufacture frozen plantain. However, Momo needs to raise additional capital to import them into Equatorial Guinea and is seeking further investment.

His ideas do not end there. Looking ahead, Momo says there are endless opportunities for entrepreneurs in Equatorial Guinea’s untapped, unsaturated market.

“We just need to make sure that we see opportunities in our problems and look for how we can develop business ideas that benefit the community.”