When US fast-food giant KFC entered the Kenyan market in 2011 Gavin Bell was hired to oversee the set up of the business, which now has four stores and an additional two expected to open by the end of the year. Bell is the general manager of Kuku Foods, the KFC franchisee in East Africa, but he is stepping aside at the end of this month to go back to entrepreneurship. 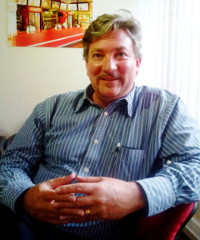 The veteran restaurateur had built one of Kenya’s most well-known brands 16 years ago. However, a change of model led to massive losses, US$2m in debt and the near collapse of the business. He now hopes to take the lessons he has acquired running KFC to rebuild his brand Kengeles Bar and Restaurant, a chain that had fallen from nine outlets to just one.

In the early 2000s at the height of the success of Kengeles, Bell decided to franchise the business. An avid supporter of the franchising model, he handed over operations of his nine restaurants to individual owner-operators and hired a managing director to oversee the whole operation.

He then concentrated on promoting franchising in his role as founder of the Kenya Franchise Association, and worked with a consultancy involved in projects revolving around social franchise programmes on education, malaria eradication and healthcare in Africa.

Although being away from his business contributed to the many challenges it faced, Bell notes that franchising is what nearly killed Kengeles. Looking back he says the market was not ripe for the model. Operators running individual stores as opposed to being allocated a particular territory, was not the best way to go about it.

So after two years he chose to scale down the business to just one outlet due to operational challenges and “internal finance and fraud issues”. By then he had accumulated about $2m in personal debt. “We ended up massively in debt. We could have gone bust but we had spent a lot of effort and energy in building this brand so there is no way I was going to let that happen. We had to go back to basics. I went back to running Kengeles everyday myself and we got ourselves through that stage. By doing that we managed to maintain the name, hence Kengeles has never died as a brand.”

It took Bell over four years to pay off the accrued debt. Although the financial burden was huge, he says it is the “the stress and anguish that was even more costly” adding the experience left a lot of people “hurting, angry and annoyed”.

“I wanted to crawl into a corner and die. I honestly did. I wanted to jump off the highest building because it was unbelievable. I had to go to my kids’ schools and ask the management not to kick them out. Then I had to go to every single solitary supplier of Kengeles and explain myself,” Bell recalls.

“It was tough because you have to humble yourself to a horrible level. You listen to people tell you every story about how you have taken their life savings, and this and that. To sit here today and say that we got through that… is amazing and very positive.”

One of the things Bell is glad he handled right is the communication with all affected parties as opposed to just wishing things away. Integrity and the desire to resurge the Kengeles brand someday are what motivated him to face the challenges head on, and pay off every single cent the business owed.

“I did not want anybody ever to turn around and say ‘that’s the guy who ripped me off and he still owes me money’. So many people definitely thought they would never see the money that Kengeles owed them but eventually everybody got paid. And I now have no fear. I know Kengeles will bounce back because there is no hang-up over what happened in the past.”

“We had to take those steps, painful as it was and it was painful beyond belief. But now Kengeles is 16 years old as a brand and that has a lot of value to it. And that means we have something very strong to build on.”

Despite his grim experience Bell says franchising can be a good business model, adding that it works best when the structure and support mechanisms around it are done properly. On the other hand running one’s own local business and applying lessons from international franchise systems to professionalise your brand can be effective. He cites the case of Kenya’s leading coffee chain Java House, which was co-founded by US-born former relief worker Kevin Ashley in 1999. Java now operates 23 stores, has attracted private equity funding and is expanding regionally.

“It has been successful because they run it themselves. Kevin is very clever in the fact that instead of bringing in a franchise, which he could well have done, he copied the principles of a franchise and ran it himself,” says Bell. “You know if I look back on Kengeles it’s exactly what we should have done.

“Instead we chose to say let’s see if we can establish a franchise system and have 400 Kengeles. If we had continued running it ourselves we could have been talking about 20 Kengeles now. Instead we went backwards from nine stores to one. That almost sounds crazy but it’s not.”

Either way Bell explains that business is about “taking measured risks” and success and failure stories can be found in both franchise and non-franchised types of business.

Too entrepreneurial to work for someone else

He describes his last four years with KFC as “an amazing journey” with lots of learning he hopes to apply in his personal entrepreneurial ventures. Among those lessons has been how to handle everything from HR, training, distribution, warehousing, marketing and managing the supply chain to international standards that KFC franchisees have to adhere to.

“I am very happy because I couldn’t be leaving the business in a better position. KFC is doing exceptionally well [but] it is now time for me to move on. If I owned KFC it would be very different but I don’t.”

Part of the reason Bell is leaving is because he is “too entrepreneurial” to be stuck in an environment where the parameters are created for you. “There are a lot of exciting opportunities out there that I would like to get involved in, from both a shareholders and ownership perspective, as opposed to this environment where I am not a shareholder of the business.”