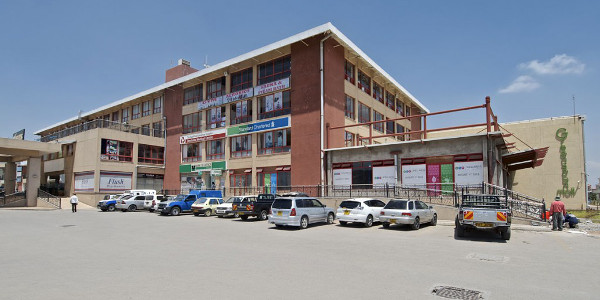 The Greenspan shopping mall in Nairobi

How we made it in Africa talks to Fahari’s CEO, Kenneth Masika, on introducing a new security to the market, as well as some of the opportunities he sees in Kenya’s property sector. Below are slightly edited extracts.

Is the fund mostly focused on commercial property or is it also looking at residential?

At the fund we’ve got a strategy where we want to create a diversified portfolio of quality assets, and so we are looking into the main sectors of property – that is retail, commercial, light industrial, hospitality, and residential. But what we are doing, to start with as we scale up the fund, is to try and concentrate more on the four sectors except for residential for the time being. That is not to say we won’t look at residential assets – but we want to concentrate on retail, commercial, hospitality and light industrial [first] just because of the fact that in Kenya the leases of those particular sectors tend to be at least six years. So you get a relatively long period where the rentals and escalations can be defined, as opposed to residential leases which tend to be annual – and on the outer edge you’ll be talking about two years. So we thought, as a strategy, it would be good to concentrate on those four sectors; building some sort of predictability in terms of the income the REIT is getting and, consequently, what we are able to pay out to our shareholders – before then [going into] residential. And at the end of it, as we scale up, we will even look at other assets. A REIT can own property in any sector provided it is income generating… But we want to start with those four main sectors in the main towns, and even in growing nodes where we can get capital appreciation and a good quality asset that, in terms of rental, has got quality tenants as well.

The fund is looking to raise an additional Ksh.9bn (US$87m)?

Correct… In the beginning when we went to the Capital Markets Authority – this is the regulator that regulates REITs in Kenya – we got approval for Ksh.12.5bn ($121m). When we went out for the first IPO we were able to raise Ksh.3.5bn ($34m) – so now we are looking to raise the balance. And this is obviously because we would like to scale up the fund. The bigger the fund is, [the more] you can then leverage off economies of scale and are able to return to your unit holders. And that’s what we want to do. So we are in the process of creating a pipeline of suitable assets in line with a strategy that we have. And obviously then we will need to go back into the market and crystallise that pipeline.

Describe the market trends are you observing in terms of property in Kenya?

At the moment, as you are aware, it is an election year. Things tend to get a bit of a cold during an election year. In terms of rentals, those seem to be staying flat for most of this year – and that is basically in your commercial, light industrial and residential rentals. In your retail sector, your shopping malls and the rest of it, there is a bit of pressure for rentals to come down. And [the reason for] that has been two-fold. The economy is quite cash-tight at the moment, so there is not a lot of spending power out there. So people in the retail malls, they are finding their sales are not adding up to meet up with their budget and consequently this translates into them finding the rentals quite expensive. As for the banks in the retail space… as you are aware there was a recent law that came in and capped the banks’ interest rate that it could charge clients. Obviously that has had a knock-on effect on their bottom line. And so we are seeing, where their leases are coming up for renewal in the malls and [other retail spots], that they are pushing for a discount in terms of the rates.

In terms of sales prices… as you get to an election year, obviously large transactions do slow down. We are seeing it this year. So we expect the property prices to remain stagnant – or you will have minimum escalations, about 2% to 5% on the utmost, for most of the sectors, except in certain areas of Nairobi where you have got apartments. There is a middle-to-high income area called Kilimani – the area around Kilimani and Westlands – where the apartment sector prices seem to be stagnating. And that is largely out of the fact that there is an oversupply of apartments. So pretty much, if you’re a buyer, you’re spoiled for choice. So that seems to be keeping the values stagnant.

Which of the real estate sub-sectors hold opportunities for new developments?

There has always been a huge demand for low-cost housing. But the biggest challenge in Kenya – and I am sure this is everywhere else in the continent – is land values. You find that the land values, as a component of the developed product, is already so high that the final product, in terms of what it is being sold for, cannot be classified as low-cost/income housing. The solution, in my opinion, would be the government stepping in and providing the land, with then a private developer doing the development so that you are also looking at a social-economic angle to it – that could make it work. It would make the land reasonably affordable. The other way to do it would be if the government could [handle] the infrastructure. And by that I mean picking a piece of land slightly to the periphery of the major towns (like Nairobi, Kisumu, Mombasa) and then the government adds the access – like the roads, the water and some sort of public transport… Areas [could be] about 40km or so out of Nairobi, just like they do in other countries. If the government could do the infrastructure bit of it, then the land would be affordable in those areas, and you start talking about low-cost/income housing – as long as people can live there and travel back into town for their jobs. But there is a huge demand for low-cost/income housing.

What about opportunities in the four areas that the fund is focused on (retail, commercial, hospitality and light industrial)?

When it comes to the retail sector, in terms of square footage coming into the market (outside of South Africa), Nairobi has got the next largest space for retail. I wouldn’t say that [opportunity] is saturated, but there is definitely a good supply of retail space.

What seems to be interesting are logistics parks, and these are coming up with the new networks of roads, bypasses, and things like the larger LAPSSET project – which is the Lamu Port-South Sudan-Ethiopia-Transport corridor development. The LAPSSET project will have a pipeline for crude oil, a railway component… and also a road component. There is a big highway being built from Lamu (Kenya) to connect the Indian Ocean with the Atlantic Ocean on the other side… So you will find that movement of goods will become a very big issue, because obviously if you can connect the Indian Ocean to the Atlantic, then it will make it easier to ship things to Kenya rather than having to go around through South Africa. If you come round to Mombasa you would be able to offload at the port and move them by road… Also, within Kenya, you find that the government is also developing bypasses and big roads – like the Thika Road and also the road being built from Lamu to Garissa. So logistics parks for movement of goods seem to be an area where there is demand for targeted development.

Fahari’s net asset value has fallen slightly. What is the reason for this?

The net asset value has remained relatively stable because we listed at Ksh.20, and at the end of our reporting for 13 months to December 2016, the net asset value was Ksh.19.81. That small drop there is due to the listing costs we had, which are once-off to just get the REIT listed. That is what caused that drop.

The biggest challenge that we are facing is the trading price on the Nairobi Securities Exchange – obviously it is common knowledge that the Nairobi Securities Exchange does not perform well. We experienced a bear run for most of last year and still a fair bit of this year. There has been a little bit of recovery but it is still a bear run, and – depending on which statistics you believe – I read somewhere that the NSE was the second-worst performing stock exchange in the world last year. So what has happened has been the trading price of the REIT on the stock exchange has ranged anywhere between KSh.10.50 and KSh.11-12, anywhere between there. So there is a clear disconnect between the net asset value and the trading price on the stock exchange. And we feel [why] people are trading at those low figures is basically [because of] a lack of awareness or education. Obviously this being the first REIT, we are going through all the stages… of rolling out the first-of-its-kind investment vehicle [in Kenya]. So there is limited understanding of it both within the general public and investor community, and even, surprisingly, with people in the property sector.

What we are trying to do is roll out an educational awareness as Stanlib – also in conjunction with the regulator, the Capital Markets Authority, and the Nairobi Securities Exchange – just to build awareness and educate people that when they are looking at a REIT, it is not a trading company. A REIT is underpinned by physical property assets that are generating income… So the right way to look at a REIT and the value of a REIT is actually in the net asset value, and not on the traded value on the Nairobi Securities Exchange. So we are rolling out an awareness campaign on that to educate on how to evaluate a REIT. We tend to believe that as awareness and education permeates into the market there will be a strong correlation between value and how to assess the REIT, and also for people to just understand that a REIT is a relatively long-term investment. By long term I am not talking a decade or something like that; I am talking about a horizon of at least three to four years. It is not the kind of stock to jump in and out of… It is an investment that is set up to give long-term returns to developers while giving you a sort of annuity-style income – and you also find that the assets appreciate in capital value. So to take advantage of that you need to have a slightly longer term view.